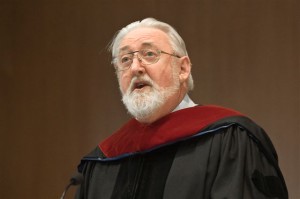 The funeral takes place in Jerusalem today of Fr Jerome Murphy-O’Connor, the Dominican priest and leading authority on St Paul.

The 78-year-old Professor of New Testament at the École Biblique in Jerusalem died on Monday, 11 November 2013, in the city.

A Memorial Mass is to be held in St Mary’s, Pope’s Quay, Cork on Saturday 23 November at 11am for the Irish scholar, who was a cousin to Cardinal Cormac Murphy-O’Connor of Westminster in London.

Born on 10 April 1935 to Kerry Murphy-O’Connor and Mary McCrohan, Fr Jerome was the eldest of four children.

He attended the Christian Brothers College in Cork, going on to study at Castleknock College in Dublin. While there he decided to become a Dominican priest.

Fr Jerome entered the Dominican Novitiate in Cork in September 1953, giving up his baptismal name ‘James’ and to take a new name in religion, ‘Jerome’, a symbol of his commitment to his faith.

Bearing in mind his future career, this was an apt choice, as Jerome is the patron saint of Biblical studies.

After his novitiate, Fr Jerome studied Philosophy for a year before studying at Tallaght and at the University of Fribourg in Switzerland.

Murphy-O’Connor was ordained priest in July 1960. In Fribourg, the core of his scholarly life emerged, his first serious study as a lecturer being on the theme of Preaching in St Paul, which he later developed into a doctoral thesis under the direction of the Dominican and Biblical scholar, Ceslas Spicq.

From there he went to Jerusalem to the École Biblique, which was to become his religious, scholarly and personal home for the next 40 years.

The École Biblique, founded in 1890 by French Dominican scholars, was an internationally renowned centre for Biblical studies and Biblical archaeology. Fr Jerome was appointed Professor of New Testament there in 1967.

Oxford University Press invited him to write an archaeological guide to the Holy Land which was published in 1980. This was translated into several languages with a revised edition in 1986, and has become the standard guide-book.

Fr Murphy-O’Connor lectured around the world and made numerous television appearances, including Le Mystère Paul (2000), Jesus: The Complete Story (2001), The Search for John the Baptist (2005), The Lost Tomb of Jesus (2007), and Christianity: A History for Channel 4 (2009).