The death has been announced early this morning, Tuesday 21 March, of Martin McGuinness. Mr McGuinness was 66 years of age and had been diagnosed with a rare medical condition, amyloidosis, late last year.

In January of this year Mr McGuinness resigned from his position as Deputy First Minister in the Northern Ireland Assembly following continued controversy over the refusal of Arlene Foster, First Minister, to step down while an investigation took place into the controversial Renewable Heat Incentive, which led to an overspend of £490m for the Stormont Assembly. His resignation led to Assembly elections, which took place on 2 March 2017.

This morning, President Michael D. Higgins paid tribute “to the immense contribution [of Mr McGuinness] to the advancement of peace and reconciliation in Northern Ireland – a contribution which has rightly been recognised across all shades of opinion”.

President Higgins said that “The world of politics and the people across this island will miss the leadership he gave, shown most clearly during the difficult times of the peace process, and his commitment to the values of genuine democracy that he demonstrated in the development of the institutions in Northern Ireland.”

He referred to recent meetings he had with Mr McGuinness at official events, most recently at the GPO for the 1916 commemorations and at sporting events.

He concluded his statement with an acknowledgement that the death of Mr McGuinness “leaves a gap that will be difficult to fill”.

Mr McGuinness was a controversial figure in politics, but one who demonstrated the power of politics and peaceful negotiation over violence. He was a former member of the IRA’s Army Council, yet became Sinn Féin’s negotiator in the peace process, and served in the Northern Ireland Assembly as Deputy First Minister with First Ministers Ian Paisley, Peter Robinson and Arlene Foster respectively.

This complexity was acknowledged by Bishop Donal McKeown of Derry, who said that “for those who know him well, there will be a huge sense of personal loss. Martin’s role in moving Northern Ireland from conflict to politics has been immense. Others will have more painful memories of how their lives were affected. And I encourage everyone, when they reflect on Martin McGuinness, to be sensitive to how his death will be felt across this community.”

Martin McGuinness was born in Derry on 23 May 1950. His mother was from nearby Buncrana, Co. Donegal, and his father was from Derry.

He attended St. Eugene’s primary school in the city and later a technical college, leaving school at the age of 15. Northern Ireland at the time was a place of sectarian division between Catholics and Protestants, nationalists and unionists, and civil rights issues loomed large. 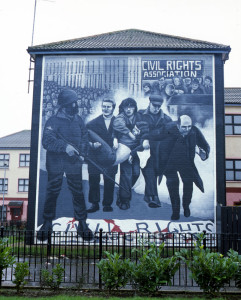 By the age of 21, he already held an important position in the IRA in Derry as second-in-command, and he was in that position at the time of Bloody Sunday on 30 January 1972, when British soldiers shot 26 civilians during a protest march against internment.

Mr McGuinness spent time in prison in the 1970s, and became more involved in politics after his release. He was the chief negotiator for Sinn Féin during the negotiations that led to the Good Friday Agreement, which was ratified by referendum in 1998.

Despite controversy over his IRA membership, Mr McGuinness surprised many with his ability to work with major figures from other traditions, including the late Ian Paisley and Mo Mowlam. His handshake with Queen Elizabeth during her visit to Belfast in 2012 was seen as a significant gesture and a symbol of the progress that had been made towards peace in Northern Ireland.

His medical condition deteriorated in recent weeks, and he died in Altnagelvin Hospital, Derry, this morning. Mr McGuinness is survived by his wife Bernie and children.

In a statement issued this morning, Archbishop Eamon Martin said that he was saddened to hear of the death of Martin McGuinness, who “made an immense contribution to sustaining peace by reaching out a hand of friendship and reconciliation and being prepared to model alternatives to dispute and division”.

Archbishop Martin said that he “thanked God that in recent years we have preferred peace to the horror of violence and war.”

He said that “Martin’s personal warmth and open, friendly personality were able to melt away suspicion and help build trust with those coming from very different perspectives. Being grounded in love for his family, community and native city of Derry, he understood the importance of a peaceful, just and prosperous future for all. Martin was ambitious for peace. He knew that peace was worth striving for and was within reach in his lifetime.”

Referring to recent events in Northern Irish politics, Archbishop Martin said that “A fitting legacy for Martin would be a redoubling of efforts on all our parts to find solutions to our current problems and continue along the journey to a shared future. May he rest in peace. Ar dheis Dé go raibh a anam dílis.”