Death of Fr Kevin Scallon founder of the ‘Intercession for Priests’ 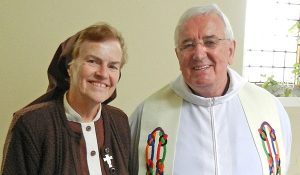 The death has occurred of the well-known retreat giver, Fr Kevin Scallon, CM who founded the Intercession for Priests in 1976, a ministry he was assisted in by Sr Briege McKenna.

However, his funeral Mass will take place in St Peter’s Church, Phibsborough, Dublin on Wednesday 4 July at 12pm. He will be buried in Irvinestown, Co Fermanagh on Thursday.

Fr Scallon is an uncle of Fr Paschal Scallon, CM, the Provincial of the Vincentians in Ireland and a brother of Damien Scallon, husband of Rosemary Scallon [Dana].

The Intercession for Priests was started by Fr Scallon at All Hallows College in 1976 in response to the upheaval in the priesthood which followed the social, religious and political changes of the 1960s and 1970s.

Many priests had decided to leave the priesthood while those who remained were questioning the nature of priestly ministry.

Sr Briege McKenna joined the gathering of Fr Kevin and 11 other priests on the very first day of the Intercession for Priests, 16 July 1976, the feast of Our Lady of Mount Carmel.

Over the years, the Intercession for Priests has grown and countless priests have found it a source of renewal for their priesthood.

Lay people also got involved in parts of the annual retreat, asking to be prayed with and for especially in times of illness.

Recalling the reasons for founding this ministry, Fr Kevin Scallon wrote, “I began the Intercession for Priests out of a great concern I experienced while working as spiritual director at All Hallows College during the early 1970s. Reports kept coming back about alumni who were leaving the priesthood, sometimes after only a few years in the ministry.”

“The question was, what could be done and, while much was said about it, it seemed there was little anyone could do.”

“In 1974, I had heard of a movement in the US called Intercession for Priests. I was struck by this idea and said to myself: ‘Yes, at least we could pray for the spiritual renewal of the priesthood.’ It was about that time that I had a sudden and very significant conversion experience of the reality of Christ in my own life which greatly affected my interior life and my priestly ministry.”

“So it was, in 1976 with Fr Myles Rearden CM, I planned to hold the first Intercession for Priests hardly knowing what I was doing.”

From Ireland the Intercession for Priests has spread to England, Scotland, France, Australia, Papua New Guinea, Nigeria, the Philippines, and the United States.

The team running the Intercession pray for priests to be full of the love of Jesus Christ and secure in their identity and vocation; they also pray in thanksgiving for faithful priests and for those who are persecuted and imprisoned, rejected and poor.

This year’s Intercession for Priests will begin at Knock Shrine on 6 August on the National Day of Prayer for Priests with a special day of gratitude in honour of Fr Kevin Scallon.

The Intercession will then continue in Maynooth and Capuchin, Fr Hayden Williams, OFM Cap, who leads a community dedicated to the new evangelisation, is the guest speaker.