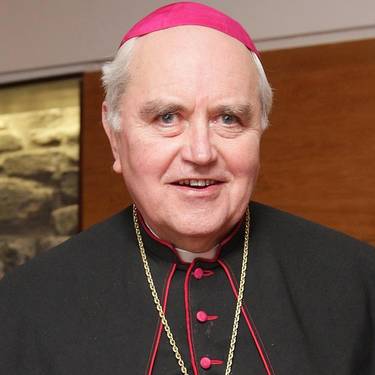 The 79-year-old led the Diocese of Derry from 1994 until 2011 when he retired on health grounds, referring to an “irreversible and progressive” illness.

Born in Kilcar, Co Donegal, Bishop Hegarty had previously served as Bishop of Raphoe from 1982 until 1994.

He was ordained to the priesthood by Archbishop John Charles McQuaid in St Patrick’s College, Maynooth, in 1966.

He taught in Colaiste na Croise Naofa, Falcarragh, where he later became president (1971–1981).

He oversaw the establishment of Pobalscoil Chloich Cheannfhaola in 1973, becoming its first principal. His last appointment before his elevation to the episcopate was as a curate in Stranorlar.

He was made Bishop of Raphoe in 1982. His episcopal ordination was presided over by Cardinal Tomás Ó Fiaich in March of that year in Letterkenny Cathedral.

Following the resignation of Bishop Edward Daly of Derry on 26 October 1993, Dr Hegarty was appointed Bishop of Derry on 1st October 1994, and was installed at St Eugene’s Cathedral, Derry on 6 November 1994.

On 7th November 2011, Bishop Hegarty issued a statement in which he stated that he had been diagnosed with “a condition which is, unfortunately, irreversible and progressive”. He said he had submitted his resignation because he was no longer able to fulfil his role as diocesan bishop.

The two years leading up to his resignation were dominated by the clerical abuse scandals. In 2009, 17 priests in the Derry diocese were found to have child sexual abuse allegations filed against them.

In 2010, some media reported that Bishop Hegarty was a named as a defendant in a civil legal action on behalf of an alleged victim of a priest of Derry diocese. In a statement, Bishop Hegarty said no diocesan funds had been used to compensate the victim.

This followed his 2005 apology to parishioners in which he admitted he had not told them that a 3 per cent levy from their contributions was going towards the Stewardship Trust Fund for victims of clerical sex abuse. The trust was set up by the bishops to provide financial redress to victims and to fund child protection initiatives.

In 2014, the 63-year-old Auxiliary Bishop of Down and Conor, Donal McKeown, was appointed as the new Bishop of Derry, succeeding Dr Hegarty.

Ahead of the appointment of Bishop McKeown, two diocesan administrators were temporarily at the helm of the diocese. The first appointment was Msgr Eamon Martin, who left to become Coadjutor Archbishop of Armagh. He was succeeded by Fr Francis Bradley who took on the temporary role.

On Twitter on Friday, the SDLP Leader, Colum Eastwood MLA, expressed his condolences, tweeting: “I was sorry to hear of Seamus Hegarty’s death today and I want to express my sincere condolences.”

“I will miss our conversations and the contribution Seamus made to our city. He had huge shoes to fill when he succeeded Bishop Daly in Derry, and he served communities in difficult times.”