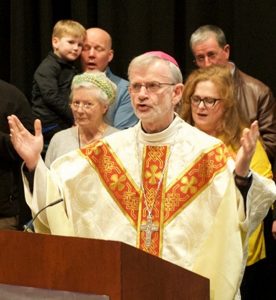 The death of Eugene Greene, one of the worst child abusers to ever don a clerical collar, has highlighted a downside to the practice of defrocking paedophile priests.

There is no formal process for breaking the news to victims of clerical abuse when that ex-priest dies.

Last week, the Diocese of Raphoe issued a statement that An Gárda Siochána had informed it the 91-year-old had died in Cork last November. Bishop Alan McGuckian said that once the diocese was made aware of Greene’s death it immediately advised Tusla, the child and family agency.

But in an on-air confrontation on Raidio na Gaeltachta’s Barrscéalta programme, one of Greene’s victims, Máirtín ó Gallachóir, took Bishop McGuckian to task for the diocese not contacting him and other victims, once it had heard that the former priest was dead.

Mr ó Gallachóir said Greene’s victims learned off his death from the media.

The priest was sentenced to 12 years in prison. While in prison, in November 2004, he was defrocked, so the Raphoe diocese had no idea of his whereabouts after he was released in 2008.

As it is Church policy not to publish death notices for priests convicted of child abuse, there are barriers in place preventing one diocese from knowing what happens in another. It is widely reported that Greene died in Cork, on the other side of the country from Raphoe, and that his cremated remains were then thrown into the sea.

Because Greene no longer had any connection with the Raphoe diocese, the gardaí were not obliged to inform it of the abuser’s death. Bishop McGuckian said that even if the diocese had known of Greene’s death at an earlier date than this month, some victims had made it clear they do not wish to be contacted by the Church.

On air, the Bishop said that when first the diocese heard of the death it was only as a rumour, and it took several days before they could confirm that the former priest had been dead for several months. Bishop McGuckian, who came to Raphoe in 2017, offered to meet with victims.

But why didn’t the Gardaí contact Tusla or why didn’t Tusla contact the victims?  Usually, in circumstances where additional hurt is likely to be caused to the victims of sexual abuse, especially adult victims, the advice given is that contact should be made with a rape crisis agency. But this is a practice that requires victims to make the first move and to make contact the rape crisis agencies for help and support.

Here there is a need for contact to be made with the victims. But who should make that contact? Should it be a Church or a state agency? Clearly, there needs to be a national policy on this and other issues, if we are to avoid causing greater hurt to victims of abuse.