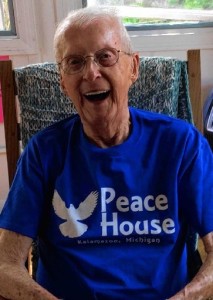 Tributes have been paid to the well known Catholic peace activist Jerry Berrigan who died in the US last Sunday aged 95.

Along with his brothers, the Jesuit priest Fr Daniel and Philip, a former Josephite priest, Jerry Berrigan was involved in many anti-war protests in the US against nuclear proliferation, the war in Iraq and other causes.

He was arrested so many times that he had lost count.

Jerry Berigan’s most recent arrest occurred on Good Friday in 2011 at Hancock Field Air National Guard Base near Syracuse over his protest against drone strikes by the US military.

Jerry was one of the early followers of the Catholic Worker movement in Syracuse, whose ethos centred on hospitality and welcome for those in need.

He was a friend of the Catholic Worker founder, Dorothy Day.

Jerry and his brother Fr Daniel along with 58 others were arrested in 1973 for disrupting a White House tour by kneeling in prayer on the last day of United States bombing in Cambodia.

He also pleaded guilty to pouring blood on the floor of the Pentagon in 1979.

In 1965, he travelled to Selma with a Syracuse contingent that took part in Martin Luther King’s march for voting rights.

He and his wife Carol, whom he was married to for over sixty years, helped Rev Ray McVey to found Unity Acres, a rural retreat for homeless in Oswego County. The couple were also involved with the jail ministry and other social justice initiatives.

In 2008, he told The Post-Standard newspaper that he would do one thing differently, given the chance. “I would have resisted more often and been arrested more often,” he said.

Jerome Charles Berrigan was born on Dec. 20, 1919, in Ely, Minn. He was one of six sons of Thomas, a railroad engineer and union organizer, and Frida.

He served in the US Army for three years during World War II.

He later attended College of the Holy Cross in Worcester, Mass., and studied to join the Josephites. He left the seminary, and in a recent interview with The Post-Standard he commented, “I wasn’t holy enough”.

He earned a degree at Le Moyne College in Syracuse and retired in 2002 after 35 years of teaching English and writing composition at Onondaga Community College.

He is survived by his wife and two daughters, his brother Fr Daniel, two sons, Philip and Jerome Jr and five grandchildren.

Retired Auxiliary Bishop Thomas Costello, who met Jerry Berrigan in the 1950s, called him a prophet and a peacemaker.

“Each time he was arrested was a prophetic statement,” Costello said. “He challenged all of us. I think that was part of his ministry.”

Berrigan’s legacy is simple, Bishop Costello said, “God is peace. Peace is God. His acts spoke more loudly than even his words.”