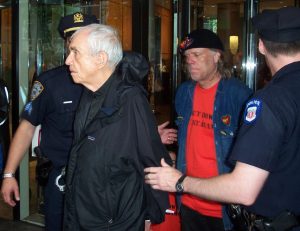 One of America’s and the Catholic Church’s most high profile pacifists, Jesuit Fr Daniel Berrigan, died peacefully on Saturday at the age of 94.

The peace activist, who opposed the war in Vietnam, was imprisoned at the end of the 60s for burning draft files in a protest against the war.

Fr Berrigan died at Murray-Weigel Hall, a Jesuit health care community in New York City after a “long illness” according to a spokesman for the Jesuits’ USA Northeast Province.

Daniel Berrigan grew up in New York, with his parents and five brothers. His father was second generation Irish.

After High School he joined the Jesuit order and taught preparatory school in New Jersey before being ordained in 1952.

In the 1950s he made something of a name for himself as a poet and his first collection of poetry titled, ‘Time Without Number’ won the Lamont Poetry Prize in 1957.

He credited Dorothy Day, the co-founder of the Catholic Worker Movement, with introducing him to the pacifist movement and influencing his thinking about war.

Berrigan and his younger brother, Philip Berrigan, who was then also a priest, emerged as leaders of the radical anti-war movement in the 1960s.

The two brothers founded the Catholic Peace Fellowship, which helped organise protests against US involvement in Vietnam.

Daniel was deeply influenced by his younger brother Philip, who had served in the army during World War II and after the war became a Josephite priest.

Daniel marched with Philip in the civil rights movement at Selma in 1965.

As Philip became more active in the anti-war movements against US involvement in Vietnam in the late 1960s, Daniel joined him in the protests.

Their most famous protest was in 1968. With seven other participants, Daniel and Philip burned 378 files of young men who were to be drafted for military service.

This led to the Berrigans’ arrest with the other members of their group. For a time Philip and Daniel Berrigan avoided their prison sentences and were on the FBI’s Ten Most Wanted List.

Berrigan wrote of the incident and the trial in his play ‘The Trial of the Catonsville Nine’.

Daniel Berrigan was released in 1972 after serving about two years. His brother served about 2.5 years.

The Berrigan brothers began the Plowshares Movement, an anti-nuclear weapons campaign in 1980.

Both were arrested that year after entering a General Electric nuclear missile facility in King of Prussia, Pennsylvania, and damaging nuclear warhead nose cones.

From 1970 to 1995, Daniel Berrigan spent a total of nearly seven years in prison. He continued his peace activism, protesting against the 1991 Gulf War, the Kosovo War, the US invasion of Afghanistan, and the 2003 invasion of Iraq.

In an interview with The Nation magazine on the 40th anniversary of the Catonsville demonstration, Fr Berrigan lamented that the activism of the 1960s and early 1970s evaporated with the passage of time.