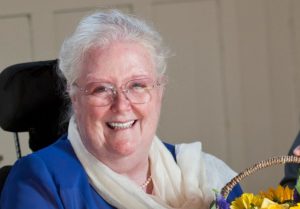 The UK-based Catholic artist and writer, Elizabeth Wang, has died peacefully at her home following a short battle with pancreatic cancer.

She was known to many people through her religious paintings, reproduced in many books and journals, and as the founder of the Radiant Light movement.

Mrs Wang was surrounded by her immediate family when she passed away on 10 September in Hertfordshire.

Just six weeks ago she was on pilgrimage to Lourdes with her family and her diocese.

The artist is survived by her three children, Fr Stephen Wang, Chris Wang and Mary Figg.

Requiem Mass will take place on Thursday 22 September at 11am at the Catholic Church of Our Lady of Lourdes, Rothamsted Avenue, Harpenden, followed by burial at Westfield Road Cemetery, Harpenden.

Elizabeth Wang was born in 1942 and received into the Catholic Church in 1968.

She was an artist, homemaker and mother who spent her time writing, painting and speaking about prayer and the Catholic faith. She was involved in the life of her home parish of Our Lady of Lourdes, Harpenden, as a catechist.

She exhibited at the Royal Academy, and the Royal Institute of Painters in Watercolours.

She also had solo exhibitions of religious work at Westminster Cathedral, the Bar Convent Museum (York), Oxford University Catholic Chaplaincy, and at various schools and parishes throughout the country.

Her artwork has been used recently by presenter Frances Hogan on EWTN television, and installed in the Catholic chapel at Wormwood Scrubs prison. Many of her paintings are published side-by-side with her religious writings.

Radiant Light is a movement within the Catholic Church. It seeks to encourage people to grow in holiness by believing and living the Catholic faith in its fullness. Jesus Christ Himself is ‘the radiant light of God’s glory’ (Heb 1:3). 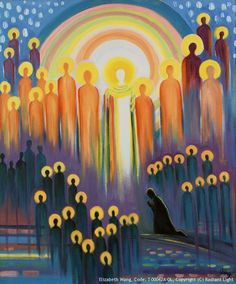 Elizabeth Wang’s online gallery can be seen at www.radiantlight.org.uk. It features 200 paintings used in 15 exhibitions.

An article published by the Catholic Times in 2005 explained that light is the common factor in all Wang’s paintings: lighter colours swathe and swirl darker shapes, enveloping disciples in a tissue of light, encircling Mary with the infant Jesus or shooting out like glorious rays.

This motif derives from Wang’s spiritual inspiration – the ‘teachings’ she personally experienced in prayer over 20 or so years.

All have been a kind of ‘enlightenment’ of traditional Catholic teachings.

Wang felt impelled to share these “teachings”, through her art and catechetical writings.

She explains this “teaching in prayers” as follows: “Something momentous was implanted by God in my soul: nothing new; but something already known in outline about the Holy Trinity, or about glory, or grace, or souls, or prayer – or Our Lady, or the Incarnation – was suddenly made vividly plain.”