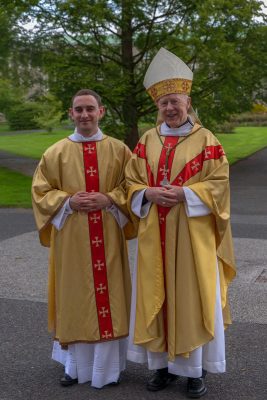 Archbishop Michael Neary has welcomed the ordination of a new deacon in Maynooth, but cautioned that he is entering a changing church.

“In so many ways we are at a crisis point for religious faith. A decision for or against faith is required. This faith will be costly but it is the conviction that the world is shaped, defined and formed by the power and reality of God,” the Archbishop said at the diaconate Mass of Shane Costello.

The Archbishop said that at an ordination it could be easy to become excessively nostalgic for the time that the sanctuary was crowded with young people for ordination. This change leaves people threatened, dislocated and above all uncertain about the future for the Church.

“This rather uncertain time requires that we be alert, watching for glimpses of God’s work, his call and his will. The newness which God brings about demands obedience on our part,” said the Archbishop at the ordination Mass on Sunday (2 June 2019).

Referring to the readings of Ascension Day, he said that the apostles were not permitted to stand and stare, to gaze towards the heavens and wait. Instead there is work to be done in preaching Jesus Christ.

He said that this is what all Christians have been called to and what Shane Costello was being ordained deacon for.

“In our society the Church is being led to newness, new awareness, new duties, new forms of mission, new possibilities which may be puzzling for us, which may scare us and make us defensive,” he said.

He added that in living between past and future Shane Costello is invited to entrust himself to the Lord as he declares himself available for service in the Lord’s work.

“Shane will find that the challenging vision of faith will clash regularly with the self-indulgent fantasy of our culture. It would be easy to resort to sociological remedies, focus on structures and recoil from our responsibility to preach the Gospel.” He said that in the Gospel the worldly authorities are regularly baffled by this new power of God and resentful of it.

Shane Costello has been in Saint Patrick’s College, Maynooth, for five years and his diaconate is a step towards priesthood.

“A Church which is turned in on itself becomes an end in itself and is no longer the Church of Jesus Christ. This Feast of the Ascension and the Ordination of Shane as Deacon provides us with an opportunity to reflect on the Church’s mission in the world and the way in which worship and witness need and enrich each other,” he said.

The Archbishop congratulated Shane Costello and his parents and family and all who have been involved in his formation along the way to make him ready to be a minister of Jesus Christ. He extended welcome to Shane Costello and prayers and support on behalf of the people in the Archdiocese of Tuam, as he looked forward to working with him.

Archbishop Michael Neary, Archbishop of Tuam, spoke at the ordination Mass in the College Chapel of Saint Patrick’s College, Maynooth.

Present at the ordination were Shane Costello’s parents, Seamus and Mary, and other family members; the President of St Patrick’s College, Dr Mullaney; the Rector, Dr Tomás Surlis; Formators, staff members, and students.

Back in 2013 there was a new pastoral plan for the Archdiocese of Tuam titled ‘Journeying Together in Faith’ for the period 2013 to 2020. At that time it was estimated that by 2020, the 55 parishes of Tuam would be served by approximately 50 priests, some 20 fewer than were in active ministry at that time. The document underlined the importance of vocations to the priesthood, but also in planning for the future, and a time when parishes may not have a resident priest and they might be part of a team in groupings or ‘clusters’ of parishes.