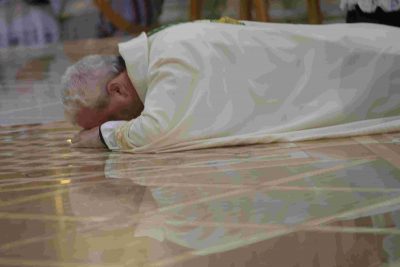 Fr Michael Router prostrates himself at the altar of Armagh Cathedral before his consecration as bishop (Photo: Liam McArdle).

The auxiliary bishop said the preparation for his episcopal consecration yesterday began the day his parents brought him to be baptised in Mary Immaculate Church in Virginia in April 1965.

Describing his parents, Tony and Nora, as “the most supporting and loving people in my life”, Ireland’s newest bishop said he enjoyed growing up in Ireland during the 1960s, 1970s and 1980s. He said he had a very strong appreciation of the goodness and faith of so many people in the Church in the years following the Second Vatican Council.

But he acknowledged that many in Ireland had a more difficult experience. “I am sharply aware that some people do not share the same positive experience of the Church that I have.”

In particular, Bishop Router said that between the mid-19th century and the mid-20th century, the institutional Church “did not adequately challenge the social divide that existed in society”.

He told the congregation in Armagh Cathedral: “Despite the pioneering work of many Church personnel in the fields of education and health care, it did not adequately defend, in the way it should have done, the rights of the poor and vulnerable. The Irish Church’s mistakes and failures have caused deep hurt and pain to many people and we must remember and acknowledge that, while we celebrate here today, many people have turned their backs to us and walked away.”

Bishop Router cited the reflections of the Canadian philosopher Charles Taylor on how modern secularism has “dethroned” Catholicism throughout the Western world. As the Church has been disentangled from the dominant institutions in society, paradoxically it has been liberated in a way that allows it to find a new and creative voice in the present.

“The fact that the Church has been stripped of its former power and prestige is not a negative thing,” he said. “The Church will be smaller and humbler in the future but those who are involved, who practise regularly, who volunteer their time, energy and resources to support the mission will not be doing it for any social or economic advantage but because they want to; because they see that life has no meaning without Jesus Christ at its centre.

“The quest for meaning, such a central issue in the modern world, will always bring people back to the faith.”

In addition to Bishop Router’s parents and his sisters Breda and Martina, among those present in the packed cathedral were: Archbishop Eamon Martin of Armagh, the chief celebrant; Cardinal Seán Brady, Archbishop Emeritus of Armagh; Archbishop Kieran O’Reilly of Cashel & Emly; Archbishop Jude Thaddeus Okolo, Apostolic Nuncio to Ireland; Bishop Leo O’Reilly, Bishop Emeritus of Kilmore Diocese; Monsignor Liam Kelly, Administrator of Kilmore Diocese, and many of the diocesan bishops from around the country.

There were also representatives present from each of Armagh’s 61 parishes, plus members of the Armagh Diocesan Youth Commission. Archbishop Richard Clarke of Armagh represented the Church of Ireland, and the Rev Louise Donald represented the Methodist Church.

Bishop Router said the Church needs to plan for a future with fewer priests. “The future will also necessitate greater education and formation of committed lay people to provide leadership at a liturgical, spiritual and administrative level and at the level of evangelisation and outreach.

“I see that very much in operation here in this archdiocese in the opportunities available for adult faith formation and in the ongoing planning for the future in parishes and pastoral areas that is advanced and productive. Developing and working with small groups of people, basic Christian communities, to provide support for the committed Christian in a hostile world and support for ourselves in our ministry will be essential.

“Now is the time for us, people and clergy together, to listen to the promptings of the Holy Spirit in order to shape a Church fit for purpose in the 21st  century, and to continue to bring ourselves and our communities into a deeper relationship with Jesus Christ who will take on all our burdens and our anxieties if we trust in him.

“To know Jesus in prayer and in the reading of scripture is to allow him to change us from the inside out. That is our task as ministers of his sacraments and of his Word; not to place burdens upon people’s shoulders but to give them hope. None of us are perfect – all of us are sinners, but we won’t change or strive to be better unless we first encounter the real Jesus and let him touch our hearts,” Bishop Router said.