Allow yourselves to be led by the Spirit Pope urges 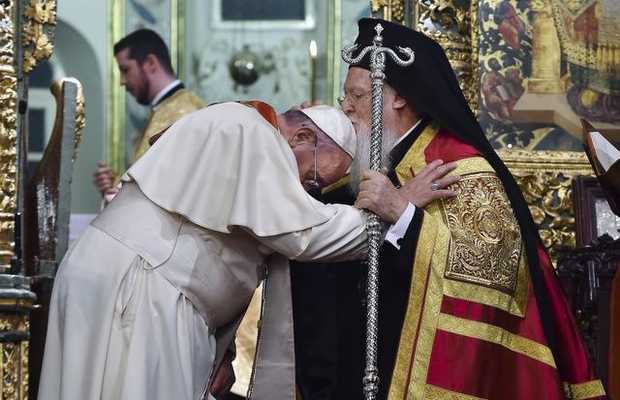 On the second day of his apostolic visit to Turkey, Pope Francis travelled from Ankara to Istanbul when he began the day with a visit to Istanbul’s most important mosque, the Sultan Ahmet, also known as the ‘Blue Mosque.’

On arrival in the city, the Pontiff was welcomed by the Governor of Istanbul and by the Ecumenical Patriarch Bartholomew I.

Pope Francis was received at the ‘Blue Mosque’, which was built between 1609 and 1917, by the Grand Mufti and they jointly spent a moment in silent prayer.

The name ‘Blue Mosque’ derives from the 21,043 turquoise ceramic tiles adorning the walls and the dome.

Pope Emeritus Benedict XVI visited the mosque during his trip to Turkey in 2006.

Afterwards, Pope Francis proceeded to the Museum of Hagia Sophia, the basilica dedicated to Divine Wisdom, first built in the year 360AD by the Emperor Constantine on a site previously occupied by pagan temples.

It was later destroyed by two fires, one in 404AD and another in 532AD, and the emperor Justinian undertook its reconstruction in order to make it into “the most sumptuous work since the time of Creation”, ordering all the provinces of the empire to provide their best marble and most prized materials.

Hagia Sophia was inaugurated for the third time in 537AD.

During the conquest of Constantinople in 1204AD, it was despoiled of its richest adornments by Latin Christians and in 1453AD, when it fell into the hands of the Ottomans, Mehmet II ordered it to be transformed into the first imperial mosque of Istanbul.

During the subsequent three centuries, this Muslim place of worship received splendid gifts from various sultans, until the 18th century, when the mosaics were covered with plaster.

In 1847, the Sultan Abdulmegid engaged the Swiss architects Gaspare and Giuseppe Fossati to uncover the mosaics and restore the building.

In 1935, at the behest of Ataturk, Hagia Sophia became a museum, which it remains to this day.

Popes Paul VI, John Paul II and Benedict XVI all visited it during their trips to Turkey.

Pope Francis signed the guest book of Hagia Sophia, first in Greek with the phrase Αγία Σοφία του Θεού (Holy Wisdom of God) and then in Latin: Quam dilecta tabernacula tua Domine (Psalm 38), which translates as, “How lovely is your dwelling place, O Lord.”

After leaving Hagia Sophia through the Beautiful Gate, Pope Francis proceeded to the papal representation where he was awaited by members of the Catholic communities (Latin, Armenian, Syrian and Chaldean) of Istanbul, and where he was greeted by the president of the Episcopal Conference of Turkey, Archbishop Ruggero Franceschini, OFM Cap. 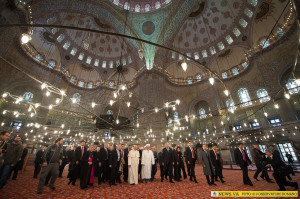 Later on Saturday, the Pope participated in an ecumenical prayer service with the Ecumenical Patriarch of Constantinople, Bartholomew I, at the Patriarchal Church of St George in Istanbul.

Following the service they held a private meeting.

Earlier in the afternoon, the Holy Father celebrated Mass in the Cathedral of the Holy Spirit in the city where in his homily reflected on the need for Christians to be guided by the Holy Spirit who is able to kindle diversity, multiplicity and, at the same time, bring about unity.

He warned that the temptation is always within us to resist the Holy Spirit because he takes us out of our comfort zone and unsettles us.

We must throw off our defensiveness, the Pope said, not remain entrenched within our ideas and unchanging ways and allow ourselves to be led by the Spirit.

On Sunday, the final day of the Pope’s journey, he will meet with the Chief Rabbi of Turkey and sign a Joint Declaration with Patriarch Bartholomew I.

On Friday, Pope Francis highlighted the plight of Christians in the Middle East and called on Muslim and Christian leaders to denounce violence for the sake of their shared common traditions which include “the adoration of the All-Merciful God”.

In his meeting with the President of Religious Affairs Mehmet Görmez, the Pontiff said that “as religious leaders, we are obliged to denounce all violations against human dignity and human rights.”

He referred to the “especially tragic” situation in Iraq and Syria, describing the humanitarian situation there as unbearable.

The Pope also expressed concern over the extermination of Christians and Yazidis, which he said was so extreme it sought to eradicate any trace of their existence.

“They have been forcibly evicted from their homes, having to leave behind everything to save their lives and preserve their faith,” he said.

The Pontiff added that religious leaders had a unique contribution to make and emphasised the common theological ground between Islam and Christianity.

Both faiths, he said, “are the bearers of spiritual treasures of inestimable worth”.

The Pope underlined that Turkey has a great responsibility to promote an “encounter of civilisations” and identify “viable paths of peace and progress”.