Nichols warns Cameron of challenges ahead 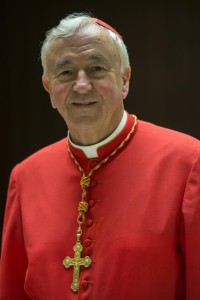 In a statement the Cardinal said, “His new government faces many challenges, not least encouraging and sustaining economic growth and, at the same time, giving particular attention to the needs of the poorest people in our society today.”

He added that the Catholic Church in England and Wales looks forward to working with the newly elected Parliament “for the common good of all.”

In the run up to the election CAFOD, the Catholic aid agency in the UK, canvassed politicians on climate change.

The sixth-form student was among a large interfaith group of young people who went to the Houses of Parliament to lobby about climate change at the start of the general election campaign.

She also helped to deliver One Climate, One World calls from CAFOD supporters in every constituency in England and Wales to the offices of the different political parties the day before going to the polls.

“It (the election) could have a really dramatic impact on my future,” said Amber Hill. “Climate change is one of the issues that matters most to me. I find it amazing that we haven’t done as much as we should have. I think it’s important to get as many people out of poverty as possible as a result of focusing on climate change.” 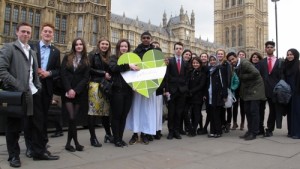 The young CAFOD leaders joined youth representatives from Christian Aid, World Jewish Relief, Islamic Relief, and MADE in Europe for the #FaithOnClimate lobby, asking MPs from various parties what action they proposed to tackle changing climate.

Sarah Barber from CAFOD comented, “The people CAFOD works with overseas are telling us that the changing climate is impacting upon their communities, livelihoods, and homes. We’d like to thank Amber for standing in solidarity with our sisters and brothers around the world by calling for action to cut polluting fossil fuels and to ensure that everyone has access to clean and sustainable energy.”

The Conservatives surprised pollsters by securing a majority of 331 seats to Labour’s 232.

Rev Dr James Hanvey, SJ, Master of Campion Hall, University of Oxford, has stated that while the general election might have returned a Conservative majority government, the results “cannot disguise a deeply divided nation, one which has rarely been more fragile and is heading into a precarious future.”

In an article published in the Jesuits of Britain’s Thinking Faith journal, he stated that nationalism and the question of Britain’s relationship to Europe loomed large in the election.

There are also the economic and social divides, not only between north and south but also within communities as inequality grows and communities feel neglect and despair.

He suggested that the two principles of Catholic Social Teaching, solidarity and subsidiarity, could help.

“Whether it is natural or economic disaster that threatens us, since 2008 we have all recognised that a nationalism that is about protective isolation cannot be the answer; indeed it is a danger to all its citizens: we need to build and work within international structures and this requires a different way of thinking,” he stated.

“The principles of solidarity and subsidiarity allow us to do that by holding the global, national and local in a creative and mutually supportive relationship.”

He added that St Augustine understood the limitation of the ‘earthly city’ but also that “we cannot abandon it.”

“We have a duty to work to secure the good within it and through it. In other words, we cannot abandon politics. Above all, whether in government or in opposition, parties need to recognise that they exercise their power for the good of all the people,”

He concluded that the elections results suggest that the people of the United Kingdom are ready to “try something new.”