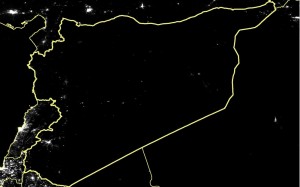 This Sunday the conflict in Syria enters its fifth year.

Yesterday, a global coalition of humanitarian organisations revealed that eighty-three percent of all the lights in Syria have gone out since the war began.

Analysing satellite images, scientists based at Wuhan University in China, in co-operation with the #withSyria coalition of 130 non-governmental organisations, have shown that the number of lights visible over Syria at night has fallen by 83% since March 2011.

“Satellite imagery is the most objective source of data showing the devastation of Syria on a national scale,” said Dr Xi Li, lead researcher on the project.

“Taken from 500 miles above the earth, these images help us understand the suffering and fear experienced by ordinary Syrians every day, as their country is destroyed around them. In the worst-affected areas, like Aleppo, a staggering 97% of the lights have gone out. The exceptions are the provinces of Damascus and Quneitra, near the Israeli border, where the decline in light has been 35% and 47% respectively.”

The #WithSyria coalition, which includes Trócaire, has called on the international community to boost the humanitarian response to the Syrian crisis, including resettling programmes to share the burden being shouldered by Syria’s direct neighbours.

“We are entering the fifth year of what is the worst humanitarian crisis the world has seen in a generation,” said Trócaire Executive Director Éamonn Meehan. “We must continue to support the people caught in the conflict.” 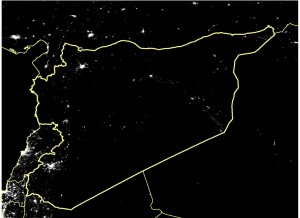 “The UN Syria Humanitarian Assistance Response Plan for 2014 was just 48 per cent funded. A lack of funding has forced the World Food Programme to reduce food rations by 30 per cent. This simply is not good enough,” said Mr Meehan.

“At the upcoming donor conference in Kuwait later this month, the EU in particular needs to step up and commit itself to adequately funding the humanitarian response.”

“2014 was the darkest year yet in this horrific war,” said Jan Egeland, Secretary General of the Norwegian Refugee Council and former United Nations Undersecretary-General for Humanitarian Affairs.

“Civilians are not protected as the Security Council promised they would be, their access to relief has not improved and humanitarian funding is declining compared to the needs. It is an outrage how we are failing Syrians.”