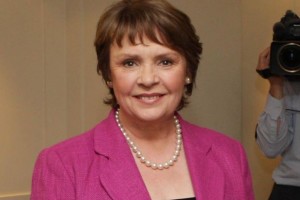 Pro-life activist and former MEP, Dana Rosemary Scallon, will be among the guest speakers marking the 30th anniversary of the founding of the Cursillo movement in the Diocese of Derry later this month.

To mark this occasion, the Derry Diocesan Secretariat is hosting a special renewal weekend at Termonbacca Carmelite Retreat Centre.

The weekend begins on Thursday evening 24 September with a Thanksgiving Mass in St Eugene’s Cathedral in Derry City for the gift of Cursillo to the diocese.

This will be celebrated by Bishop Donal McKeown and he is set to address the missionary role of the laity in his homily.

The weekend proper opens on Friday morning at Termonbacca and continues until Sunday 27 September.

The event is primarily aimed at personal spiritual renewal and re-commitment by all those who have ever done a Cursillo weekend (known as Cursillistas) to living out what is fundamental to being a Christian.

The Cursillo movement is an apostolic movement within the Catholic Church.

It was founded in Majorca in Spain by a group of laymen in 1944, while they were refining a technique to train pilgrimage Christian leaders.

Cursillo is the original three-day movement, and has since been licensed for use by several mainline Christian denominations, some of which have retained the trademarked ‘Cursillo’ name, while others have modified its talks/methods and given it a different name.

The Cursillo focuses on showing Christian lay people how to become effective Christian leaders over the course of a three-day weekend.

The weekend includes fifteen talks, some given by priests and some by lay people. These talks are called ‘rollos’.

The major emphasis of the weekend is to ask participants to take what they have learned back into the world, on what is known as the ‘fourth day’.

The method stresses personal spiritual development, as accelerated by weekly group reunion (after the weekend).

However, the Derry Cursillo 30th anniversary celebrations will not be a traditional Cursillo weekend and therefore it is also open to anyone who might want to take some time for personal reflection, prayer and spiritual development.

Cursillo was introduced into Derry Diocese in 1985 and to date over 5,000 people have experienced a Cursillo weekend.

Every morning from 9am until 10am there will be exposition of the Blessed Sacrament with directed meditations by Sr Susan Evangelist.

On Friday afternoon there will be a reconciliation service led by Bishop Donal McKeown. There will an opportunity for private confession and later in the afternoon a special healing Mass will be held at 5pm.

On Friday evening there will be an Ultreya friendship night led by visiting Spanish Cursillistas.

This event is open to those who have never done a Cursillo. On Saturday morning Fr Drennan will talk on the theme ‘I am the Good Shepherd’ and after that there will be a talk on the importance and value of Group Reunion.

In the marquee in the afternoon (Dana) Rosemary Scallon will speak about her faith journey.

Dana, a much loved daughter of Derry, has lived her life in the glare of the public gaze but during all that time she has never shied away from displaying her commitment to her faith.

She will be followed by Fr Donal O’Callaghan on ‘Life in grace’.

On Sunday morning, Fr Peter Mc Verry SJ will deliver a talk on the theme ‘Come follow me’ which will no doubt touch on the outreach work he has been involved in for many years helping the destitute and homeless of Dublin. He is the author of “Jesus- a social revolutionary”.

The final closing Mass will be held in St Eugene’s Cathedral at 5pm on Sunday and will be celebrated by Bishop Donal Mc Keown.