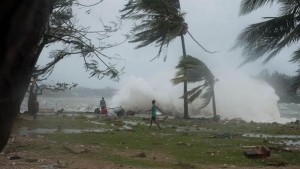 People on the South Pacific island of Vanuatu sheltered in churches and schools as a powerful tropical cyclone hit overnight on Friday 13 March and Saturday 14 March.

A high category five storm hit the island with wind gusting up to 320km per hour and sea surges of around eight metres.

It is too soon to say how many perished but it is thought that it might be dozens and thousands more have been affected.

Éamonn Meehan, Trócaire’s Executive Director, said its partners were working in the affected areas to get aid to people who have lost their homes.

Caritas is among its partners and Caritas Australia‘s Stephanie Lalor, Pacific Programmes Manager, said: “We are concerned at the intensity of Cyclone Pam and are awaiting assessments of the damage and impact. We are liaising with our Pacific partners, staff and Church networks to monitor the aftermath of the Super Cyclone, assess damage and respond to requests for support should it be needed.”

“The Church has a valuable role to play in responding to disasters like this one which often impact vulnerable communities the most. That’s why the ongoing work in the region to support communities to reduce the risk to natural disasters such as Cyclone Pam is so important,” she added.

Cyclone Pam, as it is being called, hit land on the most populated island of Efate which includes the capital Port Vila, and where more than 65,000 people live.

In Vanuatu, the UN said the tropical cyclone had moved west of its predicted route, and as a result putting several islands of the Vanuatu archipelago “directly in the path of the very destructive eye region of this cyclone”.

Stephanie Lalor said Caritas Australia partners in the region had reported evacuation and safety preparations had been underway for a few days as the Cyclone has been moving through the Pacific.

Oxfam, Trócaire and other charities have launched an emergency appeal to help people caught up in what is likely to be one of the worst disasters ever in the Pacific. 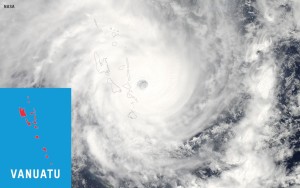 Colin Collett van Rooyen is Country Director with Oxfam and is present in Vanuatu described the cyclone saying it shook the island to the core.

“Our sturdy home rattled a bit at first and then at Pam’s most powerful moments she shook it,” he recalled, adding that they huddled on the floor closest to the strongest walls and away from windows and doors which they felt might not hold.

“We could feel it too in another way – in wondering about family far away, in thinking about friends close by and those less fortunate to have a sturdy home.”

Oxfam staffers on the island are reporting the complete destruction of homes, winds have uprooted trees three stories tall, and in some of the smaller communities, barely any houses are left standing.

Power and water have been knocked out and people are still not able to move around freely.

Vanuatu is slightly smaller than Northern Ireland and includes a chain of four main islands and 80 smaller ones made up of mountains and coastal plains.

Many of the islands are uninhabited but the total population of the country is estimated to be close to 267,000. A state of emergency has been declared by the island nation.

On Sunday, Australia’s airforce was delivering supplies while others were due to arrive from New Zealand.