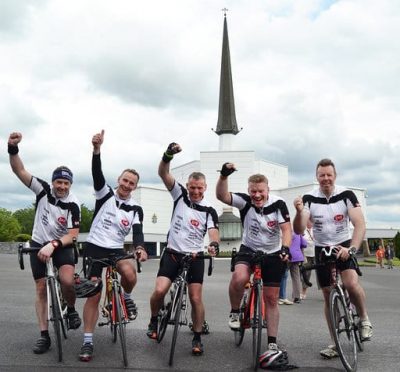 A team of four cyclists completed their epic journey from the French shrine of Lourdes in the south of France to Knock shrine in Co Mayo on Saturday evening to fundraise for two well-known charities.

A fifth cyclist, Gerry Boots, joined them for the last leg of the journey to Knock.

The group hope to raise €30,000 for Pieta House, which works with those suffering from depression or anxiety, and Down Syndrome Ireland, which is fundraising for a new regional centre in the west of Ireland.

Speaking to the Irish Independent’s farming section, Mayo farmer Alan Heaney explained that Down Syndrome Ireland is close to his own heart.

“It is a local charity that needs the money. They are in the middle of trying to get a housing project up and running which would provide respite for parents and a play area for kids.” It would be based in Swinford.

He stressed that it was also important to raise awareness about depression and anxiety and mental health amongst the farming community. As a farmer himself, he said he had seen a lot of people in the farming sector struggle last year due to the adverse weather.

Mr Heaney said the toughest part of the challenge was the lack of sleep and cycling in different kinds of weather, sometimes torrential rain.

“This was an extremely tough, mental and physical challenge and along with cycling up to 400km per day, we encountered all weather, even four seasons in one day which tested us to our physical limits.”

But he added that the four were “delighted” they had undertaken the epic 2,000km cycle and that they had arrived home safe and sound.

Donations can still be made online.