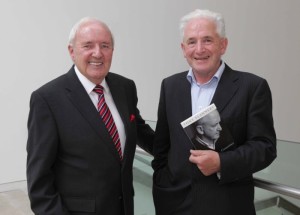 The funeral Mass of broadcaster and soccer pundit Bill O’Herlihy will take place on Friday at 11.30am at the Church of Our Lady of Perpetual Succour in Foxrock in Dublin and will be live streamed and recorded by www.churchservices.tv

The popular and high profile broadcaster, PR consultant and former journalist made Irish soccer coverage of national and international events a must see for many fans by his affable presentation style and the way he managed to drew out commentary and polemic from his panel.

Those who won’t be able to attend the funeral can see it streamed live at www.churchservices.tv/foxrock or can watch a recording of the service later through this channel.

Bill O’Herlihy is survived by his wife Hilary, his daughters Jill and Sally and his brothers Jack, David and Peter, as well as his five grandchildren.

Over his many years in broadcasting, the 76 year old garnered many awards and published a memoir. At the time of his death, he was chairman of the Irish Film Board.

A native of Cork city, he began his career in the Cork Examiner and later worked as a subeditor with the Evening Echo. He subsequently went to work in news, features and sport there.

He was a daily Mass-goer and when CatholicIreland.net interviewed him in September 2013 after he launched Fr Tony Flannery’s book, ‘A Question of Conscience’, O’Herlihy did not hold back in his criticism of how the Redemptorist had been treated.

He told CatholicIreland.net, “I think Tony is a very special priest. I met him through Frank Flannery who is a great mate of mine. From the very first time I met him I thought he was very different – very special. He was challenging.”

He added that he found challenging priests “the priests who actually sustain my faith”.

The broadcaster said he would “be extremely disappointed if Tony didn’t continue [in the priesthood]”.

He suggested that many in the Vatican needed to read ‘A Question of Conscience’ and “see the outrageous injustice that has been done” to Fr Flannery.

Asked about what the Irish bishops should do in relation to the six Irish priests censured by the Vatican, Bill O’Herlihy responded, “I know nothing about the politics of the Vatican but it seems to me that a certain mind-set contributed to the appointment of the Irish bishops.”

He said the Church today needed bishops that are “tuned into the people in the way that Tony Flannery and his guys are and not those who are aloof. [Pope] Francis is obviously completely different and is willing to make that kind of a jump.”

“As he says, we must go out to the peripheries” otherwise the numbers at Mass on Sunday, which are getting smaller will continue to decline he warned. “I think the Church is out of touch – they have to cop on!”