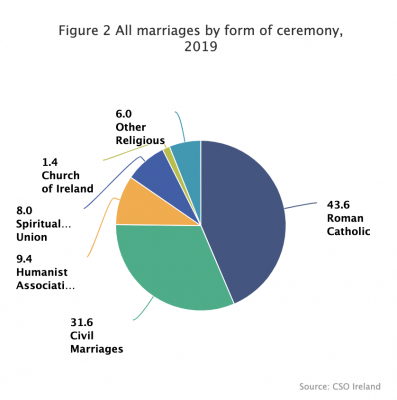 According to data recently released by the Central Statistics Office compiled from the registration forms of all marriages in Ireland in 2019, brides and grooms are getting older with an average age reaching 34.8 years for brides and 36.8 years for grooms. The number of Roman Catholic ceremonies continue to decrease from 49.2 per cent in 2018 to 45.1 per cent in 2019, while a civil marriage was the ceremony of choice for nearly a third (30.6 per cent) of opposite-sex couples. On a lighter note, Friday was the most popular day and August was the most popular month for couples to wed.

Commenting on the report, statistician Carol Anne Hennessy said: “There were 20,313 marriages in Ireland in 2019 including 640 same-sex marriages. This equates to a crude (unadjusted) marriage rate of 4.1 per 1,000 population.”

“While there were 20,313 marriages registered in 2019, there is likely to be an impact on the registration of marriages in 2020 due to the COVID-19 pandemic and this will be reflected in the Marriages 2020 Release,” she concluded.