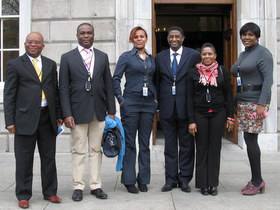 A new scheme run by the social care agency of the archdiocese of Dublin has provided a group of new Irish citizens with an opportunity to learn first-hand about how the Irish political system works.

The Opening Power to Diversity scheme was initiated by Crosscare’s Migrant Project last year. Last week, it published a report on the experience of its first batch of 16 migrants and new Irish citizens to have completed a six month stint as interns with TDs and Senators.

The aim of the project is to generate greater interest in and understanding of the Irish political system among migrant communities.

According to Crosscare, the response to the scheme so far has been overwhelmingly positive from both parliamentarians and interns.

People originally from Nigeria, China, Brazil, Zambia, Zimbabwe, the Philippines, Ghana and Eritrea have participated in the scheme working with Dáil Deputies and Senators from every political party and some Independents.

The scheme is co-financed by the European Commission under the European Integration Fund and is supported by the Office for the Promotion of Migrant Integration in the Department of Justice and Equality, as well as Pobal.

In the report on the scheme, Taoiseach Enda Kenny writes, “If democracy is to be meaningful, we need as much engagement as possible by people with politics. We need as many people as possible, from all walks of life influencing the decision making process”.

Census figures for 2011 show that some 12% of the population of Ireland were not Irish citizens. That is a rise from 5.8% in 2002. It shows that in just a decade, Ireland’s non-Irish population has almost doubled.

According to Crosscare, “This profound change has seen public institutions often struggling to catch up with the needs of an increasingly multi-cultural population.”

The Opening Power to Diversity scheme has three core aims: to help provide individual migrants with insight and experience of the Irish political system; to help generate a greater understanding among migrant communities of how the political system works; and to promote an awareness of diversity among politicians, the political establishment and society at large.

According to Joe O’Brien, Policy Officer with Crosscare, it is vital for Irish society that the Dáil should be representative of the ethnic diversity within society.

“We also want to get Irish people thinking about the reality that over time more of our public representatives will be and should be of a migrant background.”

He added, “This scheme is about taking the mystique out of politics and offering migrants a feeling of ownership of their political system.”

The report also chronicles responses from some of the interns who took part.

Erica Birch-Abban, originally from Ghana, said of her experience that it had “definitely given me more confidence, skills and insight that I could utilise in serving this nation. Our nation Ireland.”

Alfred M’Sichili, originally from Zambia, said of his experience that he “discovered that new communities will need to target increased participation at local council level as well as in the respective parties.”

A full copy of the report is available at www.migrantproject.ie