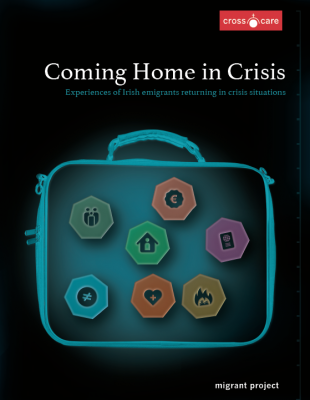 Irish emigrants returning to Ireland in crisis are experiencing poverty, homelessness, isolation, as well as mental and physical health problems, according to a new report from Crosscare which was launched on Monday.

‘Coming Home In Crisis‘ was produced by Crosscare’s Migrant Project and it sets out the negative experiences encountered by Irish emigrants returning to Ireland in difficult circumstances.

The report recommends supports be made available to them.

The report was launched on Monday by Senator Billy Lawless, Senator for the Irish Diaspora, at EPIC, the Irish Emigration Museum in Dublin.

Speaking ahead of the launch, Senator Lawless noted that Crosscare’s Migrant Project is often the first port of call for some Irish citizens returning in crisis. “We need to send a strong message that Ireland cares for its Diaspora,” he said.

Crosscare’s Migrant Project is an Irish-based, non-governmental organisation that provides information and advocacy support to Irish emigrants at the pre-departure, pre-return and post-return stages of their migration journeys.

‘Coming Home In Crisis‘ explores the lived experiences of people who have returned home in need of support. The report reveals that this vulnerable group are more likely to end up homeless and experience significant challenges accessing housing, financial and health supports.

It sets out recommendations to address the range of challenges they encounter on return.

According to Danielle McLaughlin, Policy Officer with Crosscare Migrant Project, “Emigrants who are returning to Ireland in unplanned and crisis situations have experienced issues such as job loss, homelessness, serious health needs, addiction, deportation, release from detention or prison, fleeing conflict zones or domestic violence.”

She added, “On return, they are facing obstacles to accessing the supports they need. These obstacles range from administrative challenges and emergency accommodation shortage, to delays in access to urgent social welfare payments and healthcare.”

Ms McLaughlin said the report highlights the need for efficient access to vital statutory services and supports, including to stable emergency accommodation, social welfare and medical and psychological care.

Particular attention is also required to ensure returning Irish emigrants from minority ethnic groups do not suffer from unfair discrimination.

According to the research, support for returning emigrants has increased since the introduction of Ireland’s Diaspora Policy in 2016. But improvements are still needed.

Recommendations include immediate access to homeless accommodation and emergency social welfare assistance for returnees, free medical care for those in urgent need of medical attention (while medical card applications are processed) and accelerated immigration permissions for non-EEA family members.

Crosscare’s Migrant Project is also calling for the development of training and service provision across relevant statutory services on the rights and entitlements of returned emigrants and expansion of the Central Statistics Office’s annual Population and Migration Estimates to capture more information on return migration of Irish citizens to Ireland.

Ten returned emigrants participated in interviews for the report. The emigrants had all returned to Ireland in crisis and were assisted by Crosscare Migrant Project. The interviews were conducted over June and July 2019.

The countries from which they returned were: Canada, Libya, Palestine, Saudi Arabia, South Africa, Spain, Thailand, UK and USA. The time spent abroad broke down as follows: three had spent between 1 and 5 years abroad; four had spent between 6 and 20 years; and three more than 20 years.

Representatives from many of the emigrant support groups interviewed noted that demand for their services outweighs their resources and they said there is a need for the expansion of resources, shared learning, and collaboration.