Call for email database of Irish emigrants abroad to be created to keep in touch with the quarter of a million Irish people have left the State since 2008. 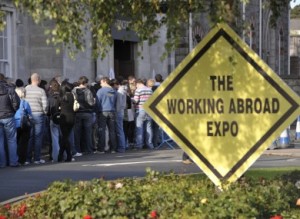 The Government has been urged to move with the times and connect more directly with the Irish diaspora overseas, particularly recent emigrants.

Since April 2008, a quarter of a million Irish people have left the State.

In its presentation to the Joint Oireachtas Committee on Foreign Affairs and Trade on Wednesday, Crosscare’s Migrant Project also suggested that the Government should initiate a database of Irish emigrants abroad with a view to creating a stronger online connection between the Irish State and its diaspora.

Speaking during the Oireachtas presentation, Crosscare Migrant Project’s policy officer, Joe O’Brien said, “What is unique about this wave of emigration is that it is the first in the internet age and in many respects, the current Irish emigrant is more connected with home by using social media and internet video calls.”

However, he warned that the Irish Government has not moved with the times and in Crosscare’s experience, the “emigrants abroad continue to feel neglected by the Irish State.”

The Migrant Project wants an email database of Irish emigrants abroad to be created – the Irish Emigrant Register.

This Register, according to Crosscare, could be used by the State to send regular messages or newsletters to emigrants.

“As jobs emerge in an improving economy we believe that the government has a responsibility to notify emigrants directly of such vacancies” Joe O’Brien said.

“At a broader level it could be used as a consultation tool in the development of government policy across a range of areas. Research has shown that recent Irish emigrants are staying very connected to current and political affairs in Ireland – this connection and interest needs to be reciprocated formally and officially by the State.”

He added, “In a globalised world we should take the lead in showing other global nations how to stay connected and prove how much our diaspora means to us by establishing the Irish Emigrant Register.”

Mr O’Brien said St Patrick’s Day 2015 could offer the perfect opportunity and timeline to get this proposal up and running and launched.

The proposal for the Irish Emigrant Register submitted to the Department of Foreign Affairs and Trade can be viewed at this link: http://bit.ly/1nomXr7

Crosscare Migrant Project is part funded by the Emigrant Support Programme of the Department of Foreign Affairs and Trade to provide an information and support service for intending and returning Irish emigrants.

It is a project of Crosscare the social support agency of the Catholic Archdiocese of Dublin.