Crosscare marks 75 years as demand for its services soar 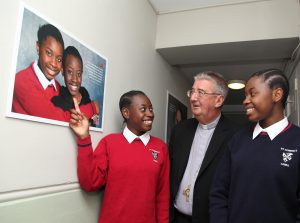 The economic crisis and financial austerity have put Crosscare under unprecedented pressure over recent years.

He added, “Crosscare, alongside others, has been called to respond directly to the staggering increase in the numbers of families and children who are now homeless.”

Speaking at the opening of Crosscare photographic exhibition on the 75th anniversary of its foundation, the Archbishop said that Crosscare now finds itself providing additional family meals to those living in hotels and giving out more through community food banks.

Over the last few Christmases stocks at such banks went so low that extra appeals went out for basic foods.

“The extent of homelessness and hunger in today’s Dublin is creating a divided society of which no one can be proud. A child who has to grow up without a proper home and who misses out on basic nutrition brings disadvantage with them for the rest of their lives,” said the Archbishop.

He also pointed out that elderly people, who built Ireland, are now facing new insecurity and loneliness. He urged people to take responsibility for at least turning a blind eye to the seriousness of what he called “the new divide in Irish society”. 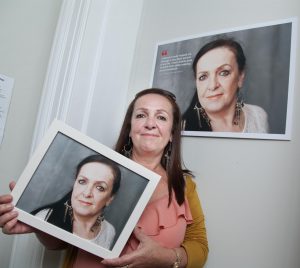 Teresa Phelan who used the homeless saervices of Crosscare with her image at the launch of the exhibition in St Paul’s Church Arran Quay. Pic John Mc Elroy.

Highlighting the need for a crusade against poverty and a campaign to fight it he said, “There is no place today just for polemics and for conflict between public and private, statutory and voluntary. We need a new sense of common purpose and participatory society.”

While emphasising that basic services and human security for all, is the primary responsibility of Government, he said this should not only be done by public bodies.

“Care for others requires more than policy and funding: it requires a true sense of community. The fight against poverty and exclusion must involve all of us. It is not that the State should privatise social care and renege on its responsibilities.”

“We need a vision of society which is not just State centered, but is community focused in which being a citizen does not mean being the recipient of support but being  a citizen also means actively supporting.”

He stated that Crosscare builds community in the way it provides services, and through direct person-to-person services which humanise the lives of those being cared for.

He gave as an example the “plate pals” volunteers who sit with sick person in hospitals or in homes while they eat and the “appointment companions” who help older people attend medical appointments.

Archbishop Martin said that Crosscare as the social support organisation of the catholic archdiocese of Dublin provides support in all parishioner’s behalf, but it also called to remind the entire Christian community of its responsibility. 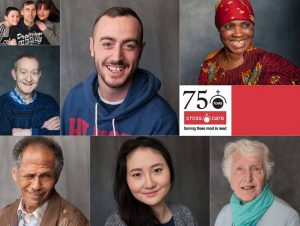 “It reminds the Church that it must itself be a witness to the care of Jesus Christ not through being a structure of power, but living the precariousness of trusting and depending on the God whose love is revealed to us in Jesus Christ,” he explained.

He said he was proud of Crosscare and grateful for how it challenges his conscience and the collective conscience of the Church.

Crosscare began its work 75 years ago in wartime Dublin when Archbishop John Charles McQuaid brought together under one umbrella, a wide range of social service initiatives of the Catholic Church within the Archdiocese of Dublin under the name the Catholic Social Service Conference (CSSC).

It was initially to address poverty affecting wartime Dublin.

“The Emergency”, as people called it, was a harsh time with widespread hunger and a lack of basic health care provisions especially for children and mothers.

CSSC was community rooted and initially entirely funded by the Dublin Mass-going Catholic community. Later it was renamed Crosscare.

The photographic exhibition at St Paul’s Church, Arran Quay, Dublin, involves 75 people and families who have availed of homeless, youth, community and food services of Crosscare over the years.

They have been photographed and have given their insight under the title “What Crosscare means to me”.

The exhibition will be available to view during 2016 before moving between Crosscare projects in a variety of locations in 2017.