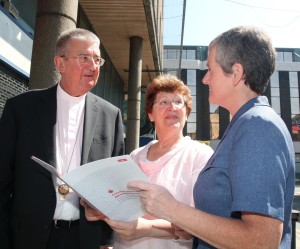 Over 700 people who presented to Crosscare’s homeless and advocacy service in Dublin last year had no income of any kind available to them.

This startling fact was revealed in the charity’s Year One Report which was launched on Wednesday by Archbishop Diarmuid Martin of Dublin.

Crosscare’s Information and Advocacy Services said many of the 700 were entitled to social welfare support, but poor information and poor service from staff in government departments saw these people lose out, placing them at risk of becoming homeless.

In his address, Archbishop Martin said that is why he likes Crosscare’s initiative because it provides information, support and advocacy to those who, in today’s Ireland, find themselves not just on the margins of society, but effectively marginalised in society.

The Crosscare Information and Advocacy programme sets out to enable those most at risk to access the available services for themselves, he explained. “The poor very often suffer from an inability to have access to services which are their very right.”

The Crosscare Information and Advocacy Service, which was established a year ago, brings together a range of existing Crosscare services.

“It is not an advocacy service about services or even about people: it is an advocacy service which places people at its centre and its aim is to enable those who are marginalised – regardless of creed or ethnic identity – to regain their sense of dignity and to have the voice and the means to begin the road of return,” the Archbishop stated.

He also made some stinging criticisms of the Government’s social policy warning that homelessness is a thermometer of the overall social climate.

“If that is the case, the current crisis of homelessness in Ireland is in fact an indication of a more widespread failure of social policy,” he said.

Describing the social climate in Ireland today as “very challenging”, the Primate of Ireland said the level of homelessness in “wealthy Dublin is shameful.”

Commenting on the level of precariousness around accommodation, especially for families, he said it was “worrying”.

“We face one of the paradoxes of many developed societies: we have increased homelessness and we have unoccupied housing; we have people hungry and enormous quantities of food are thrown away daily.” 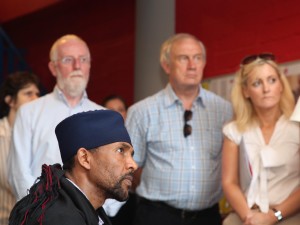 “It is no secret that they have been hit particularly hard by job losses. They also have difficulties navigating social protection supports and come up against stumbling blocks which can result in homelessness.”

“Clearly people with no income are extremely vulnerable to homelessness,” Ciara McGrath explained.

She added that the centre has dealt with people who have presented at local social welfare offices and local authorities with no income and walk away no better off.

Ms McGrath called for the proper use of the Supplementary Welfare Allowance scheme which could help keep people out of destitution and homelessness.

For many in the immigrant community, the supports are supposed to help people when they fall on hard times but are often  difficult for people to navigate because they are often paper based, often very alien, and applications must be made in what have been described as hostile environments.

Ciara McGrath referred to one example where a young man was offered a training course which he accepted but was never told that his rent supplement would be stopped when he took up the training. She said lack of information can have “catastrophic outcomes for people”. 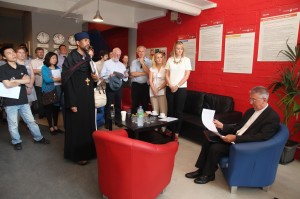 According to Sr Breege Keenan, Crosscare assisted 5,000 people last year and made 12,000 interventions with the homeless, undocumented, asylum-seekers and the disadvantaged.

One of these is 63 year old Lyudmyla Vinnikova from Ukraine. She arrived in Ireland in January 2013 and was living in a reception centre for asylum seekers.

She paid tribute to Crosscare for helping her get accommodation, social welfare payments and get on “the road of return” as Archbishop Martin described it.

“They helped me find my way when I came up against problems,” she said.