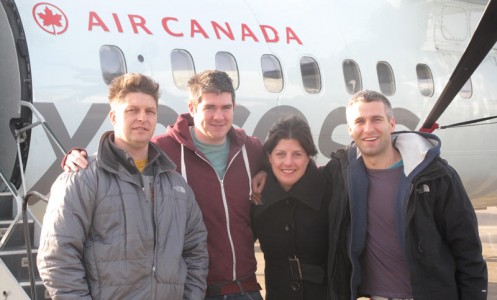 Record numbers of Irish people are expected to emigrate to Canada this year according to Crosscare’s Migrant Project.

The Canadian government visa allocation for Irish people has increased significantly on last year, up to 10,700 from 6,350.

As this year’s application process for working holiday visas opened, Crosscare’s Migrant Project suggested that it could be a record year for the number of Irish people leaving for Canadian shores.

Last year the available visas were taken up in a matter of days.

This year the visas have been split into three categories: the standard Working Holiday visa, a small number of internship visas for 3rd level graduates (International Co-op) and visas for people who have job offers in their area of qualification (Young Professionals).

Joe O’Brien, Policy Officer for Crosscare Migrant Project, which provides an information and advocacy service for intending Irish emigrants said,  “If there is the same demand for working holiday visas to Canada this year as there was last year then I think we may see the largest number of Irish people emigrate to Canada in a single year since the 1800s.”

He said the 1950s was one of the worst decades in Irish emigration history. “In 1957, we have estimates of 7,500 Irish people arriving in Canada. 2014 could break that number,” Joe O’Brien  warned.

“Of course we need to be realistic about the difference in emigration now and then. Emigration to Canada in the 1950s was often a permanent move with a lot of unknowns facing the emigrant but the nature of emigration has changed significantly particularly with the advent and development of the internet.”

The new categories of visa will give more options to intending emigrants and to Irish emigrants there who want to extend their stay. In particular the Young Professionals category will allow people to use their high levels of skills and qualifications and the International Co-op visa will allow people to cultivate links in Canada prior to graduation.

However, these new categories of visa will also mean that Irish people will be more likely to stay in Canada.

As a service that provides pre-departure information, Crosscare’s Migrant project said it was now able to reach a much larger audience with web-based information resources. Much of their information service is now emigrant driven.

They have just published a report on advice for emigrants to Canada that is 100% based on the experiences of Irish emigrants on Canadian working holiday visas in 2013.

The report, ‘What is Canada like? 101 answers’ surveyed the views and experiences of 101 Irish people who were on a Canadian working holiday last year.

The 101 emigrants were asked what advice they would give to Irish people emigrating to Canada in 2014 with findings categorised under employment, accommodation, social network, helpful organisations and final advice.

Some of the key findings of the report included emigrants emphasising the importance of networking in the search for employment, the difficulties and pitfalls of sourcing accommodation, the benefits of bringing references from Ireland and the importance of socialising with Canadians.