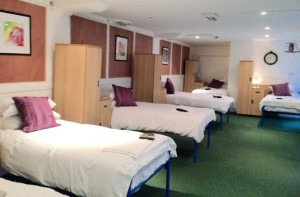 Most homeless people that Crosscare is helping have some form of addiction but more and more people are becoming homeless as a result of relationship break-ups and hardship, according to a manager at the charity’s new homeless centre.

Donna Magee is the Deputy Manager of Crosscare’s newest centre in Dublin which opened on Wednesday following the intervention of Archbishop Diarmuid Martin as a response to the death of Jonathan Corrie.

The new Crosscare residence in Dublin’s north inner city will enable its 26 long-stay residents to have a permanent address for at least six months so that they have some stability and security and don’t have to search every day for a bed.

It will also offer an additional nine emergency beds every night.

The centre caters for men and women and provides recreational facilities as well as good nutritional food for the residents, a library and a roof garden. Some of the rooms sleep three while others sleep more than that.

“I am very pleased that in the few weeks since a man died on the streets of Dublin there has been such a mobilisation” the Archbishop said though he played down his own role in that mobilisation.

He told CatholicIreland.net, “I don’t think I took the lead – I just said a few words and there was a reaction and I am happy that that happened. This place was just becoming vacant at the time and I am very pleased that we are in business again today.”

The centre contains a number of paintings by the Navan-based artist, Noreen Walsh, who attended the opening on Wednesday.

She told CatholicIreland.net, “I didn’t know anything about Crosscare and I impulsively called the Archbishop’s house two weeks ago. I had heard that he had donated a building for the homeless and it touched me very deeply. The very same morning, prior to my call, I had heard the High Hopes Choir and I was completely touched.”

“When I rang the Archbishop’s house, I told them that I couldn’t offer money but I could offer some of my work – which is soul work.”

She added that “art is a gift and it is for sharing.”

Archbishop Martin explained that the new centre offers people “something more stable” – a place that is theirs for six months instead of having to leave in the morning and come back at night as many homeless hostels do.

He said one of the things he was particularly concerned that the new facility would offer is an address which people, particularly the young, could use.

“Without an address they can get nowhere. In the Gospel, they ask Jesus ‘where do you live’ and that actually means ‘who are you’? If you don’t have a place to live in today’s society you are a ‘nobody’,” he explained.

He added, “This is a place for somebody if they wanted to study they could. You can see yourself, people here are very happy.”

Nineteen-year-old John described his new home as “amazing” and “outstanding”.

“Christmas came a lot earlier this year! The place is incredible – it makes you feel so warm and the staff are very nice and they give you so much support.”

He became homeless at 17 when a gang, with whom he had had a falling out with, started attacking his family home and he felt his departure would protect his family.

“I was living on the streets at first because I didn’t know about the Freephone number that you call to get a bed for the night.”

When he did get emergency accommodation, it was from 9pm at night to 9am in the morning and he had to find somewhere to go during the day. He couldn’t apply for any education courses because he had no address.

“The place I like best is the library – I like reading a lot. I left school at 17 because it didn’t work out for me. I got my Junior Cert but I didn’t do my Leaving Cert. I would love to go back and do my Leaving Cert… and with a stable place like this and a keyworker it might be possible. You don’t have to leave at 9am, you can go up to the library or use the computers or listen to the radio you are not on the streets causing trouble or using and abusing drugs,” he said.

He added, “You should be always given a second chance. This is my home for the next six months.”