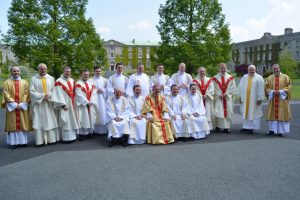 The President of St Patrick’s College Maynooth on Sunday urged nine newly ordained deacons to “courageously proclaim the Gospel in word and deed”.

Mgr Hugh Connolly said it was a “great joy” to celebrate the ordinations on the Feast of Corpus Christi.

He expressed the hope that the nine would build up the ‘Body of Christ’ as they “serve the people of God in their various dioceses and religious congregations with care and compassion.”

Bishop William Crean of Cloyne ordained the nine seminarians in the College Chapel of St Patrick’s in the presence of family, friends and other priests.

Aidan Gallagher, a native of Killeen near Louisburgh in Co Mayo. He studied for the priesthood in Valladolid in Spain and St Patrick’s College, Maynooth.

Rev Aidan will be on parish placement in Tuam over the summer before he returns to Maynooth to complete his studies. He will be ordained to the priesthood next year.

Rev Billy Caulfield was ordained a deacon for the diocese of Ferns. He is originally from the parish of Horeswood and is the oldest of four children.

Though only in his mid 30s, he describes himself as “a late vocation” to the priesthood.

“I left school and I qualified as a chef. Cooking was something that always interested me growing up and I still enjoy it very much.”

“Soon I began to realise that there was something else that I was called to. The words of St Catherine of Siena ‘If you are what you should be you will set the world on fire’ on the vocations banner made me question the direction in which my life was heading.”

In 2006, he went on pilgrimage with a priest from his local parish and they discussed vocations.

“From that moment on the seed was planted and I started to give it some serious thought. Over the next few years I got involved in my parish in the curacy of Ballykelly by becoming a Eucharistic Minister and a Minster of the Word.”

He attended World Youth Day 2008, where a catechises was given on vocations and found that “a lot of what was said was identical to my feelings and way things were happening”.

He later spent time in Australia to see if a break from his regular surroundings changed his desire to study to be a priest. “The way things went it left me with no doubt that’s what I was called to do.”

He was accepted by Bishop Dennis Brennan to study for the Diocese of Ferns and entered St Patrick’s College Maynooth in August 2011.

The diaconate is the first of three ranks in ordained ministry in the Catholic Church. It is a ministry of service which is referenced in the New Testament.

Whilst there is only one diaconate, deacons preparing for the priesthood are transitional deacons.  Those not to be ordained priests are called permanent deacons.

The nine men ordained in Maynooth today are all transitional deacons who will exercise the diaconal ministry for approximately one year before being ordained to the priesthood.

At present there are 55 resident seminarians studying in Saint Patrick’s College, Maynooth, and there are an additional twenty who attend on a daily basis to pursue their studies for the priesthood.

St Patrick’s College Maynooth has been forming men for the priesthood since 1795.