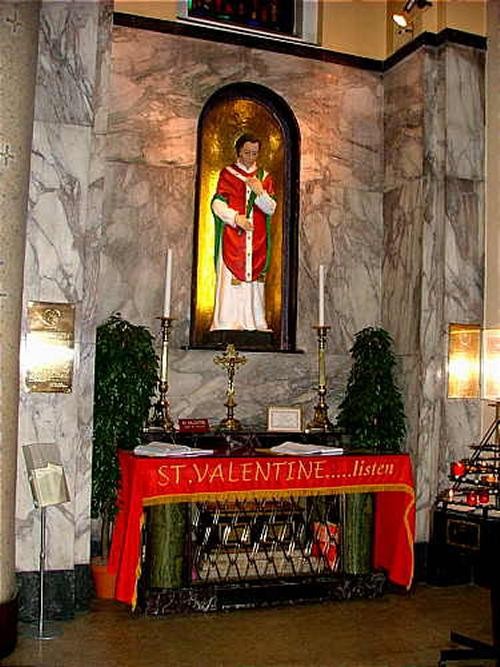 “St Valentine tells us that love is not something that one has today and that one discards tomorrow,” according to Fr Brian McKay.

Speaking to told CatholicIreland.net, he said  “Couples come to St Valentine hoping that his blessing will ensure that they stay together.”

He continued, “I think that is what he [St Valentine] would actually be advocating  – commitment, endurance, constancy, and above all belief in the sacrament of matrimony.”

During these masses Carmelite priests will bless wedding rings and couples will be invited to renew their marriage vows.

The 14th of February is a very busy day at the city centre church. Fr McKay says that people will be calling in throughout the day, and “privately in front of the altar” asking him and other priests to bless rings or renew vows.  “It is a very busy day here, a day completely devoted to love,” he said.

Years ago the saint’s reliquary used to be moved  to the centre of the church for the day, but now due to security concerns, it is left in place at the side altar. 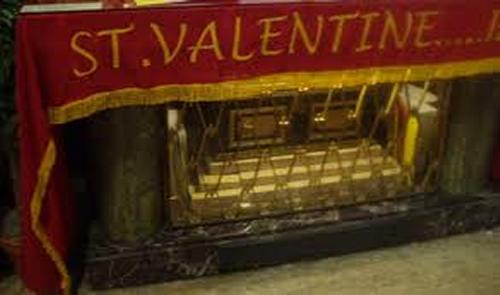 Reliquary containing some of the remains of St. Valentine

“I have to tell you  that if anybody tried to move St Valentine they would do themselves a dreadful mischief because it is a very heavy reliquary,” said Fr McKay.

St Valentine was a Roman priest who was martyred in Rome in 269 AD.

The Emperor Claudius II wished to extend his empire and believed that all young men should be available to fight, and so he cancelled all marriages and engagements.

“Their strength was to be kept for the battlefield,” commented Fr McKay.

This presented a huge problem for the Christian church so Valentine clandestinely brought couples together, arranged meetings for them and they were duly married.

“For him it was very important for the new Christian religion that sexuality was kept within the sacrament of marriage, and he gave his life in order to achieve this purpose.”

The reliquary containing some of the remains of the saint, and a small vessel tinged with the blood of the martyr, came to Ireland in 1836 as a gift from Pope Gregory to a Carmelite priest, Fr John Spratt who had greatly impressed the pope when he preached a mission in Rome.

According to the Prior of the Whitefriar Street Priory, people travel from all over the world to visit the St Valentine Shrine, often writing messages in a book of intentions which is permanently left at the Shrine. 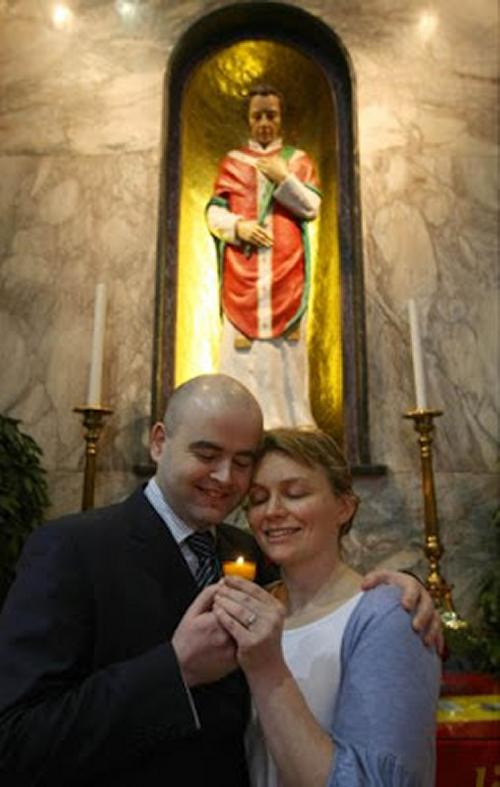 Fr McKay has seen many moving and romantic sights at the shrine of St Valentine.

He recalls seeing a  young Spanish couple standing under the statue of St Valentine.

“They were standing there, the tears streaming down their cheeks and it looked as if he had proposed to her, and she had accepted and the two of them were totally overcome with emotion, with St Valentine looking down benignly at them – it was actually very beautiful.”