Home > News > Couples do not divorce or separate lightly: Accord

Couples do not divorce or separate lightly: Accord 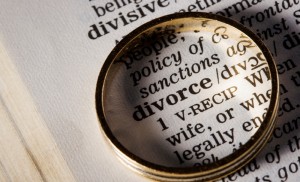 Couples do not divorce lightly in Ireland a counselling specialist has said.

“It is hard to throw in the towel when you are committed to somebody and when you have a family,” Mary Johnston a specialist in counselling (marriage and relationships) with Accord told CatholicIreland.net.

Ms Johnston said that the Catholic marriage agency does not know in most instances the outcome of counselling. “They come to us in a crisis and we work with them. We don’t know what happens in the long term.”

However, she insists that couples do not separate or divorce on a whim.

“There are children, there are arrangements to be made around finances and access and you have a different status. I don’t think people do it lightly.” 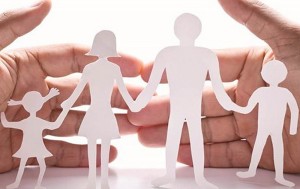 Data drawn from 2014 shows that the greatest issues causing problems for couples relate to communication (criticising, not listening or ignoring a spouse or partner).

“Essentially it is about the couple and how they relate or don’t relate. Every couple is going to experience difficulties – money disappears, extended family may need help, illness and unemployment happen, children get themselves into difficulty.”

“But if a couple can communicate well together and be close and tease things out, they will have a better chance of being able to work through the problems.”

By contrast, if they’re not listening to each other and fighting and you throw in a few of these problems, “it can be a disaster,” she added.

Ms Johnston said recent advances in technology sometimes brought problems out sooner like a spouse finding out about infidelity through a text.

In the last two years there has been a slight reduction in demand for counselling services. “I’m not sure why,” comments Ms Johnston, “but I think it might be the provision of low cost services elsewhere.”

Accord services are provided on a donation basis. 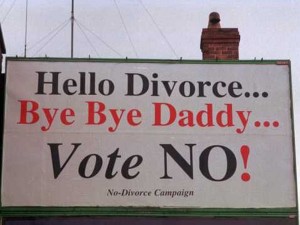 The twentieth anniversary of the introduction of civil divorce occurred on 24 November 2015.

In practice though most parents want to be involved with their children post breakup.

“Couples, no matter how badly they are getting on, want to see their children and be involved in their lives,” said Ms Johnston.

Generally she did not come across families where the relationship was severed with the father but “it can be an issue if the couple is in conflict,” she added.

Commenting on the twentieth anniversary of the introduction of civil divorce, the Iona Institute said that some predictions on both sides of the 1995 campaign were incorrect.

On the No side, the floodgates had not been opened although when separation and divorce rates were combined, one in four marriages were failing.

On the Yes side, the prediction that the introduction of divorce would lead to a decrease in cohabitation and more children being raised by married parents also proved to be false.