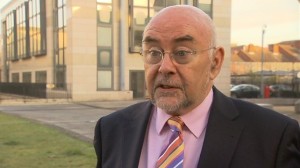 The Catholic Primary Schools Management Association has paid tribute to Minister Ruairi Quinn who has announced he is standing down as Minister for Education in the forthcoming Cabinet reshuffle, and that he will retire from politics at the next general election.

“Since his appointment in 2011, the CPSMA has enjoyed a professional working relationship with Minister Quinn and with his department officials,” Fr Deenihan said.

He said the Minister’s availability, commitment and interest in primary education, and specifically in primary management, was evident from the outset.

“Notwithstanding Minister Quinn’s tenure of office coinciding with a particularly difficult period of economic austerity, his support for students in Catholic primary schools was shown in a number of initiatives including the introduction of a book rental grant to schools, and the restoration of the small works grant. At this time, on behalf of the CPSMA, I wish to pay tribute to the Minister’s energy and determination,” the CPSMA leader said.

The CPSMA represents all the boards of management of the over 2,900 Catholic primary schools in the Republic of Ireland.

Separately, the Bishops’ Council for Education has welcomed the progress report on patronage and pluralism in the primary sector.

In a statement issued on Wednesday, the Council for Education noted the summary conclusions drawn from the DES consultation process with parents on inclusivity in schools.

“It is clear that many schools have developed good practice with regard to the inclusive education of all children within the school community,” the Council said.

“The DES report will be helpful in sharing such good practices across the system. The Catholic Schools Partnership is developing guidelines for Catholic schools in this area and hopes to publish these later in 2014. These guidelines will be informed by, and build on, the recommendations in today’s report.”

The Council said it is committed to ongoing engagement with the DES concerning the recommendations in the forum report.

It agreed that there is no ‘one-size-fits-all’ solution with regard to these recommendations, and the best way forward is based on “principles such as good communication, clarity on rights and responsibilities, openness to dialogue and flexibility”.

Such principles have informed the dialogue between the DES and Catholic patrons to date. We look forward to continuing such an approach as the partners work together to reconfigure the education system so that it responds to the various social and demographic changes in Irish society, the Council for Education said.

The new report on inclusion in schools has been described as a step in the right direction by a spokesperson for the Iona Institute.

Teacher and Irish Times columnist, Breda O’Brien, was responding to the new report on how to make denominational schools more inclusive of children of other faiths and none just released by the Department of Education.

According to the Iona Institute, the original set of recommendations from the Forum would have resulted in the ethos of denominational schools being too watered down.

In a statement, the Iona Institute cited recommendations which said prayers must be ‘inclusive, which raised the possibility that Christian prayers would not be deemed sufficiently ‘inclusive’ towards non-Christian pupils.

Similarly, a recommendation that all the symbols of all the religions of the pupils in a school be put on display raised the possibility that it would become much harder for a school to show through its religious symbols that it belongs to a particular religion.

In other words, ‘inclusion’ would come at the price of identity, the Iona Institute said.

Commenting on the new report, Breda O’Brien said, “While it will require closer study, it seems that many of the concerns of those who believed the original recommendations went too far appear to have been taken on board.”

“This report is far more moderate and appears to strike the right balance between making denominational schools more genuinely inclusive while also respecting the ethos and identity of those schools.”

She concluded, “It must always be borne in mind that a Department of Education survey of parents in more than 200 schools in 43 areas showed that there is actually very little concrete demand for a transfer of denominational schools to new patron bodies.”

“This indicates that in reality the vast majority of parents already find their local denominational schools to be inclusive”.