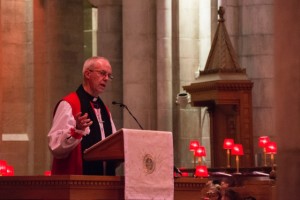 Celebrations for the 50th anniversary of the Corrymeela Community culminated at a service in St Anne’s Cathedral in Belfast on Sunday (1 November).

Most Rev Justin Welby, the Archbishop of Canterbury, and  head of the Worldwide Anglican Communion was joined by other Church leaders, including the Roman Catholic Primate, Archbishop Eamon Martin, the former Presbyterian Moderator, Very Rev Dr Ken Newell, the Methodist President, Rev Brian Anderson and the President of the Irish Council of Churches, Rev Dr Donald Watts.

In his sermon, Archbishop Welby, referring to recent challenges in Northern Ireland said, “The moment there is new pressure or new suspicions, the gaps re-emerge. Let us hold onto this: Jesus does not permit these gaps.”

“The welcome of reconciliation is a welcome that draws together antitheses, opposites, even materials that when combined are in danger of being explosive. They are deliberately, consciously and expressly brought together by Jesus.”

However, he added that the welcome of reconciliation is not a “soft” or an easy option, but a necessary part of moving beyond the politics of a peace process.

He concluded his sermon saying, “All of us, including Corrymeela, must hold on to that sense that the welcome of reconciliation is not surrendering what we are but rather encountering definitive truth together in the person of Jesus so that we are transformed and enabled to love and to see the deep differences which mean that past tensions, conflicts and even murderous outrages can find true reconciliation in the arms and presence of God.” 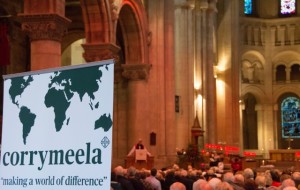 Archbishop Eamon Martin led the congregation through the opening liturgy using the three symbols that have guided the Corrymeela community in their first fifty years: an open Bible, a lit candle, and a turf cross.

Methodist President Rev Brian Anderson referred to the differences in the Lord’s Prayer or Our Father between denominations saying that the heart of the prayer is the same, “– to bring God’s people to the place of peace and supplication. Today with all our differences, both serious and slight let us join our hearts in this prayer.”

Former Presbyterian Moderator Very Rev Dr Ken Newell said, “The founder of the Corrymeela Community Ray Davey described the Christian message of peace as much more than a permanent ceasefire”.

What was necessary was an understanding of “the total health and well-being of our society, especially the recognition of the dignity and worth of every person”.

Before the service Corrymeela Community Leader Pádraig Ó Tuama said, “Corrymeela believes in the power of people telling their stories, of shared hospitality, of telling the truth about the present, of turning towards each other and finding strength, life and hope in each other. Ultimately, the work of Corrymeela helps groups learn how to be well together.”

Corrymeela was founded in 1965 by Ray Davey, a former in World War II chaplain, and a group of students from Queen’s University.

He had been a prisoner of war in Dresden and the bombing of the city changed him.

Corrymeela grew out of his concern about the tensions brewing between people of different political, religious and ideological differences in Northern Ireland.

“The collaboration over the years with Corrymeela and other ecumenical movements has been so enriching and enlightening. Representatives have been meeting regularly over the past ten years to pray and support one another. The event was a moment to realise and encourage  those friendships in Christ as part of an ongoing journey,” said Irene Jovaras of the Focolare community in Belfast.

She added that it was a joy and privilege to be part of the Corrymeela celebrations and that the service at Anne’s Cathedral was a highlight. 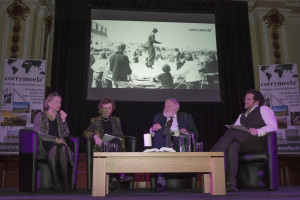 She told CatholicIreland.net that the liturgy prepared by John Bell of the Iona community called everyone to renew the calling from Jesus to offer hospitality and welcome to everyone whatever their background.

“To see Archbishop Justin Welby and Archbishop Eamonn Martin and other church leaders participating together witnessed the importance of taking steps together,” she said.

Corrymeela works with more than 10,000 people a year at its residential centre in Ballycastle and in schools and communities throughout Northern Ireland.

It also has a dispersed community of more than 150 members who commit to living out Corrymeela’s principles of reconciliation in their own communities.

A gala reception was held on Friday evening at Belfast City Hall to mark Corrymeela’s anniversary.

Around 300 guests were joined by Kathleen Kuehnast (a director at the US Institute of Peace), Ireland’s greatest living poet Michael Longley and guest of honour, the former president of Ireland, Mary Robinson.