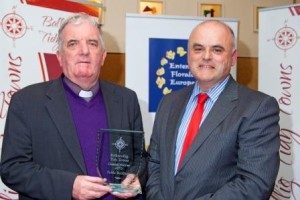 A Cork City parish is reaching out to a Syrian parish which has been besieged in the four-year long conflict.

Parishioners in Ballincollig are helping people in the war-torn Syrian city of Aleppo after their church was hit with a glass bomb in recent days.

Ballincollig’s parish priest, Fr George O’Mahony, told Mass-goers last weekend that people are aware of the plight of refugees in Iraq and Syria but may feel helpless.

“Even the very fact of reaching out, of making contact with them, and of finding ways of helping, will let them know that they are in our thoughts and prayers,” he said.

Parishioner Virginia Harrington, who made email and Skype contact with Fr Ibrahim, the Damascus-born parish priest of the Latin rite parish in Aleppo told the Irish Examiner that she was moved to act by images and stories of war-torn Iraq and Syria.

She said, “We can’t do anything about what’s happening, but you can always reach out, and let them know we are there  to make that connection, to let them know there is a little town in Ireland aware of their suffering and who want to reach out and help.”

Despite the danger, Fr Ibrahim has volunteered to stay in the ruined city with his people.

In a letter published on the Ballincollig parish website, he describes the appalling suffering and conditions in his parish.

“The bombings are not coming to an end, on the contrary, they are increasing significantly both during the day and at night,” writes Fr Ibrahim.

“Life here is absurd and I don’t wonder anymore why people seek to emigrate why they throw themselves ‘into the sea’ risking all for even life itself.

“Considering the events we see happening, according to human reason, staying here in Aleppo would seem absurd. We friars, however, remain here to help the people.”

Fr Ibrahim thanked the people of Ballincollig for reaching out and said, “From the ruins and from the catacombs of Aleppo, a prayer always rises from our hearts in our mouths for each one of you.”

There are now plans to organise church-gate collections, fashion shows, and fundraising Christmas carol concerts in the coming weeks.