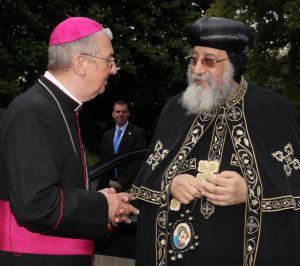 The leader of the 22 million-strong Coptic Orthodox Church is in Ireland for an official five-day visit.

His Holiness Pope Tawadros II, Pope of Alexandria and Patriarch of the See of St Mark, yesterday met President Michael D. Higgins at Áras an Uachtaráin and the Archbishop of Dublin, Dr Diarmuid Martin, at Archbishop’s House, Dublin.

Archbishop Martin told the 65-year-old Pope of Alexandria that Catholics shared the great joy of the Coptic community “that it has now found a permanent home and Church building which [His] Holiness will bless and dedicate during [his] visit”.

The new Coptic church is in Drumcondra and formerly housed a community of Catholic monastic nuns. “We pray that the Coptic presence now will continue that tradition of prayer which will be of benefit to the growth of the values of the Gospel of Jesus Christ in a new pluralist Irish society,” he said.

Describing the Coptic presence in Ireland as “an enrichment of the liturgical and theological traditions present in our country”, Archbishop Martin said Catholics and Copts shared their roots in one faith by praying together and witnessing in the world to “our common Baptism”.

In saying this, the Archbishop was referring to the Common Declaration agreed last month between Pope Francis and Pope Tawadros II, in which each church accepted the baptism of the other, saying they would seek “not to repeat the baptism that has been administered in either of our churches for any person who wishes to join the other”. 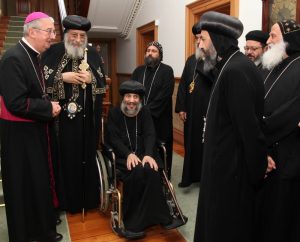 They could also give a common witness to “fundamental values such as the sanctity and dignity of human life, the sacredness of marriage and the family, and respect for all of creation, entrusted to us by God,” the Archbishop of Dublin continued, quoting again from the Common Declaration.

Pope Tawadros II was the target of an extremist attack just last month, when on Palm Sunday an ISIS suicide bomber set off a bomb at St Mark’s Cathedral, the seat of the Coptic Pope. The bomb killed 17 people and injured 41. Pope Tawadros was in the building at the time, but escaped injury.

Dr Martin told him: “Your presence reminds all people to pray for peace in your country and in the region where Jesus Christ once walked.

“We are very aware of the suffering that your Coptic community has endured even in recent weeks and we assure you of our prayerful solidarity. We pray that your country can become a beacon in the region for freedom of religion and for dialogue among all believers, especially with our Muslim sisters and brothers,” he added.

The Archbishop then referred specifically to the case of Ibrahim Halawa, an Irish citizen awaiting trial in Egypt. “We share the humanitarian concern of his family who are well known to us,” he said.

Concern for Mr Halawa was reinforced during the visit of Pope Tawadros II to Áras an Uachtaráin. A press statement following the meeting said the two leaders “emphasised the crucial value of human rights, including the freedom of religion and the rights of prisoners”.

President Higgins made particular reference to the pressing case of Ibrahim Halawa, which he described as needing “an urgent resolution”.

President Higgins and Pope Tawadros II also highlighted the importance of “inclusive political dialogue” in seeking to bring an end to ongoing conflicts or to those in danger of breaking out.

Pope Tawadros II was born in in Mansoura, Egypt in 1952. He originally studied pharmacy and worked for a time as a manager in a government owned pharmaceutical corporation before entering the monastery of St Pishoy in 1986.

He was ordained a priest in 1989 and a bishop in 1997. He succeeded Pope Shenouda III to become 118th Pope of Alexandria and Patriarch of the Holy See of St Mark in 2012.