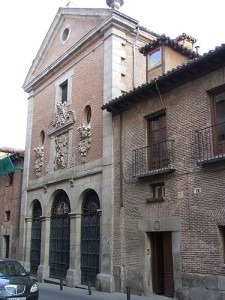 Human remains found in a convent of the Discalced Trinitarian Nuns in Madrid, may be those of famous Spanish author Miguel de Cervantes.

The enclosed nuns, through a lay secretary, stated that for 400 years their order has kept and passed down the memory of documents that registered the famous author’s burial in the convent, although the documents themselves have been lost.

There are up to a dozen cloistered Catholic nuns, ages 23 to 92, at Madrid’s Las Trinitarias convent.

They sing at Mass each morning from behind a screen and so are not visible to the public.

It is in the public records that when Cervantes died aged 69 in 1616, his last wish was that he be buried within the Trinitarias convent, where his daughter was a nun and because the order had helped pay a ransom to release him from pirates.

So while it had been known that their convent was Cervantes’ final resting place, through time and various renovations the actual location of his coffin was lost.

Less than a year ago, in April 2014, a 36-member group of archaeologists, forensic scientists and anthropologists began the search.

They used radar to probe the earth beneath the old convent, and its walls. Then after possible burial sites were identified the painstaking excavations began.

Now they have found the disintegrating remains of a coffin bearing the initials “M.C.” in the building’s crypt.

The small piece of wood on which the initials are stamped in iron was beneath the floor of one corner of the crypt.

The bones of what they think are up to 10 people were discovered nearby, so the scientists are now matching them up in the hope that one of the full skeletons will fit the profile of Cervantes.

The experts know that Cervantes was shot in the chest and in the left arm which will help identify his remains.

They expect to be able to able to confirm that they can identify the remains by the end of the year. The team have put their find on displayed it in the crypt of the convent.

Madrid City Hall has funded the project to the tune of around €100,000, in the hope that finding the remains of Cervantes will help promote tourism in the city.

However, experts are cautious stating that the find is interesting but they have much more work to do to prove definitively that these are the remains of Cervantes.

The Spanish writer was author of Don Quixote which was considered to be the first modern novel.