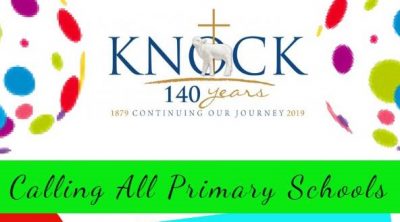 Rap, pop, spoken word or video may make an appearance at Knock 140 celebrations in August.

The National Shrine’s youth ministry has invited Ireland’s national and secondary schools to create and perform a song or artistic presentation to celebrate the 140th anniversary of the apparitions in Knock.

National schools are invited to submit a song and secondary schools to submit art, and the winners will be present in Knock at the anniversary celebrations and Novena in August.

“We are asking all secondary school students, under the title ‘Knock 140’, to come up with something to help us celebrate the anniversary, whether that is a song, short video, or something else – we left it open to them to use their creativity,” Nicola Mitchell, Director of Youth Ministries, told CatholicIreland.net.

Students in secondary schools can enter individually or in a group with a maximum of five people. Submissions will be shortlisted and 15 entries will be on display throughout the novena. The winning entry will be announced on 18 August.

National schools are invited to create a short song from each school with the title ‘Knock 140 – Continuing the journey together’. The winners will perform their winning song in front of thousands at the National Novena on 18 August. They will also receive a free school retreat day for one class in the winning school.

There is no limit to what sort of music and artistic presentations will be submitted, but Nicola Mitchell had a small hint of what is to come earlier this week.

“So far we are getting the shares and the likes and people tagging [on Facebook] but nothing submitted. The schools that come into us [for retreats] are aware of it. Some of those said to me today ‘we’re doing a rap’ – so they are all going to come up with something very unique,” she said. 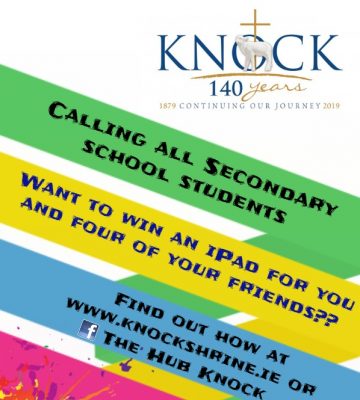 She hopes that the competition will make young people more aware of Knock and what it is all about. When students from all over the country travel to Knock for retreats, a majority admit that they have never heard about Knock before.

“Very few have been here before or have heard about Knock Shrine, which is quite surprising, as it is our National Shrine on our doorstep. I suppose we are all guilty of that. But they come and they have a great experience and you hear them saying ‘I’m definitely going to come back’. Any young people who have been here before have been with their grandparents,” said Nicola Mitchell.

She said that of the 3,000 students from both national and secondary schools who attend retreats, 70 per cent have not heard of Knock. For retreats, special events and summer programmes, approximately 6,000 young people visit Knock each year.

“What we are really trying to do here is make Knock a welcoming place for young people. When you think of Knock when you were younger, for me I often think of long masses and cold rain and wind, but we are really trying to change that image and help them see that Knock is a place where young people are welcome, and there is so much here for them,” said Nicola Mitchell.

The closing date for entries for the competition is 1 May 2019.
Applications to: [email protected] or Knock Youth Ministry, Our Lady’s Shrine, Knock, Co. Mayo.