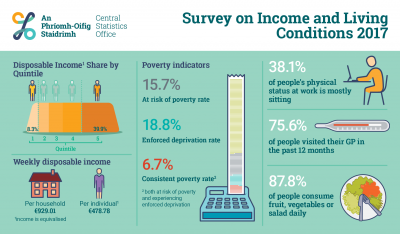 The latest figures on poverty and deprivation show modest improvement in poverty rates, according to the Society of St Vincent de Paul (SVP). However, the charity continues to see the stark reality behind the statistics as struggling families face into Christmas.

The latest EU Survey on Income and Living Conditions (SILC) figures for 2017 published on Monday (17 December) by the Central Statistics Office (CSO) show a decrease of just under 3 percentage points in the rate of consistent poverty, which was at 6.7% in 2017 compared with 8.2% in 2016.

The CSO stated that statistically significant findings were that enforced deprivation was experienced by 18.8% of the population, down from 21% in 2016. The deprivation rate for those at risk of poverty was 42% in 2017, down from 50.4% in 2016.

“Increasing rents mean that households are going without essentials as they prioritise their rent payments over other expenses for fear of losing their homes,” said Kieran Stafford, National President, SVP. “Many of the people we visit are paying high rents to live in substandard accommodation, often in a bad state of repair with poor heating and insulation because they have no alternative. The housing crisis is a scandal that continues to impact on every aspect of people’s lives.”

SVP highlighted that some Housing Assistance Payment tenants pay top-ups to their landlords, and this leaves families vulnerable to becoming homeless.

SVP welcomed progress on the child poverty target, as almost 25,000 children were lifted out of consistent poverty between 2016 and 2017. However, the charity stated that almost 1 in 5 children are now growing up below the poverty line and much more needs to be done.

Caroline Fahey, SVP Head of Social Justice, said “Thousands of homeless children are living in hotels and hubs this Christmas, with hundreds more living in direct provision centres for asylum seekers. These households do not show up in official poverty statistics.”

She concluded that there needs to be more investment in housing, childcare, health, education and energy efficiency measures so that individuals and families are supported in finding a way out of poverty. Social welfare rates and the National Minimum Wage also need to be benchmarked against the cost of a minimum essential standard of living to take into account the real costs being faced by households.

“The Government made a commitment to lift 100,000 children out of poverty by 2020 and it is clear to see little progress has been made,” said June Tinsley, Head of Advocacy, Barnardos. “Poverty worsens a child’s physical health, mental health, [and] education and causes social exclusion and isolation. Poverty increases the chances of a child experiencing homelessness, domestic violence and emotional abuse.”

She concluded that these in turn increase a child’s chances of experiencing poverty in later life and so it becomes a “vicious cycle from which many children never escape”. However, she added that this need not be inevitable.