Home > Featured > Be conscious of throwaway mentality this Christmas – Primate 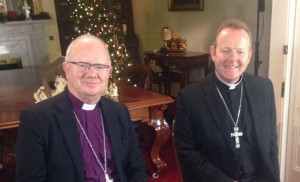 Archbishop Eamon Martin of Armagh has appealed to people to be conscious this Christmas of “how easily we can make choices to throw things away and waste our resources” and how we can fail to “cherish life”.

He said that it is after Christmas “you realise how much packaging and how much waste and paper there is. Let’s make sure we are recycling after Christmas – there are a lot of bottles, plastic and even Christmas trees to recycle properly.”

Speaking about the season of Christmas, the Primate of All Ireland said it is “one of those times where it is only right and good that we rejoice and be happy and we do our best to be good natured and full of goodwill towards other people”.

He said it was a moment when “we are more conscious of a spirit of gratitude”.

“But I think that attitude of gratitude is something we should never forget, and we should not take for granted the many things that we have growing up in Ireland which other people in other parts of the world simply do not have access to.”

Of the incoming year, he said 2020 must be a year “where we take our attitude to the earth, which is our common home, from a faith perspective. I do that inspired by the ideas of Pope Francis’ in Laudato Si; inspired by God’s call to us to be good stewards of creation for the benefit of everyone on this planet.”

“So, if there are people on this planet who are suffering more than others, disproportionately because of the impact of climate change, then that is a matter of faith and it is a matter of charity and a matter of generosity. These are big issues and in 2020 I would like to focus more on them.”

If people begin to become conscientized about how much waste we produce they could begin 2020 with a resolution to do their bit, he said.

“I know there are people out there who say, ‘this is nonsense – what difference can you make. I remember that lovely scene from the life of Mother Theresa where she was holding the child from the gutter and she was asked. ‘Look around you; what difference do you really think you are making?’ And she said, ‘Well I am making a difference to this one.’”

“I actually think that we don’t realise the power we have.”

“At a personal level I have been very interested in the whole debate about climate change particularly because it is coming from our young people – they are the ones who are challenging the world to really face this issue.”

Dr Martin said he became very alert to the issue at the October 2018 Synod on Youth in Rome.

“While I was out there, I got a sense really that we need to be listening more to young people and what they are saying. Greta Thunberg and the whole climate change discussion has captured the imagination of our young people. I felt myself saying I need to be aware of this and I need to listen.”

“I can’t understand why people would choose to attack Greta Thunberg. She is passionate about what she believes; she is only a young girl and she is speaking prophetically to the world and what do we do – we attack her. We attack her message. In fact, there are a lot of deniers who believe that this is all made up and yet we see the reality of climate change and we know scientists are absolutely unanimous in telling us that human behaviour is at least aggravating the problem.”

He explained that he and his Church of Ireland counterpart, Archbishop Richard Clarke, have been meeting with young people in the local schools in Armagh and hearing their perspectives on the climate crisis and their ideas about what we might do.”

Archbishop Martin has also been in contact with the Society of African Missions about the Laudato Tree project. “The reason I like it is because it’s encouraging people in Ireland to be aware of biodiversity and the need to plant for the future. There is a faith dimension to it; it’s about caring for God’s creation and because of the way it is reaching out to the poorest and most marginalised people of the world.”

The Green Wall aims to replant trees in an area covering 8,000kms of Africa in regions south of the Sahara which have been devastated by desertification.

“It is a planting hope because already because they have been planting for 10 years and communities are beginning to find a livelihood from the wildlife, the vegetation and they are finding the ability to grow things and stay in the region. It is actually amazing the way it is giving hope to an area which had become desert.”

“This time of the year you are thinking of those lovely prophecies in the Old Testament about the wasteland blooming once more and that is exactly what this project is about.”

The Archbishop is promoting the idea that people in Ireland consider planting a tree in somewhere like their home or in their schools or in their community. Then they pledge to plant five times that number of trees on the great Green Wall in Africa via sponsorship with the Tree Council of Ireland.

“In that way you are supporting other people around the globe and so there is a great sense of global harmony and unity.”

For their joint Christmas message this year, the two Church leaders in Armagh met up with young people and planted a tree in the grounds of St Patrick’s Cathedral. Some of their conversation with these young students will be shown on RTE Television at 12.10pm on Christmas Day.