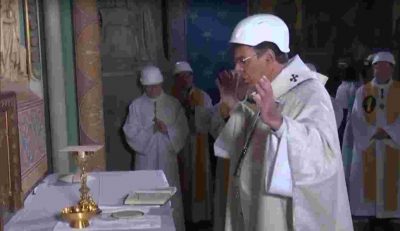 Archbishop Michel Aupetit of Paris swapped his episcopal mitre for a builder’s hard hat to celebrate the first Mass in Notre-Dame since fire swept through the cathedral two months ago.

The Mass, celebrated in a side chapel of the 13th century building, was held to mark the anniversary of the cathedral’s dedication. This is the side chapel where the Crown of Thorns relic was kept. It miraculously escaped destruction during the blaze on 15th April.

Only 30 people were allowed attend the celebration, half of whom were concelebrating priests, but tens of thousands of people around the world viewed the event as it was streamed on the internet by KTOTV (the French equivalent of Ireland’s ChurchServices.TV).

The Archbishop, the concelebrants and the congregation had to cover their heads with protective headgear during the Mass, such is the precarious state of the the building. Footage shown during the Mass gave viewers a glimpse of the destruction caused by the blaze, which destroyed the building’s roof.

French President Emmanuel Macron said he wants the works to be completed within five years so that the cathedral is restored in time for the Summer Olympics, which will be held in Paris in 2024.

At present, there are more than 120 builders working on the cathedral every day.

The restoration is not without controversy. President Macron has declared that he would like restoration to include innovative elements, but there are many who would like the cathedral restored to its original condition before the blaze.

There are also concerns about how the restoration will be financed; while nearly €1 billion of donations has been pledged, only a tenth of that has actually been paid. Ninety per cent of that money has come from the United States, not from France.

However, the cathedral’s rector, Msgr Patrick Chauvet, said that the priority is to get Notre-Dame back into daily use as soon as possible. “We want worship to be celebrated [here] again, because that is what a cathedral is all about,” Msgr Chauvet said.

During the Mass yesterday, Archbishop Aupetit was quite clearly delighted to be back celebrating the Eucharist in France’s national cathedral.