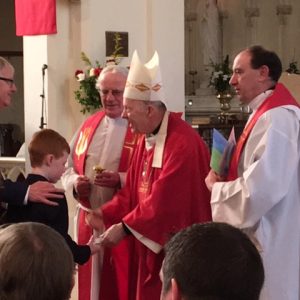 Preparation for the sacraments of First Eucharist and Confirmation were once considered by many to be the job of the primary school teacher, with minimal involvement of parents and others in the parish.

This has changed in recent times with the introduction of preparation programmes in parishes and the involvement of secondary school pupils in primary school classrooms.

Months of preparation on the part of children, parents, teachers and parish volunteers culminated last weekend in the confirmation of 88 children from schools in the parish of Kilcolman, Claremorris, Co. Mayo in what was the first Confirmation ceremony of 2017 for the diocese.

Children from 6th class in Claremorris Boys’ National School, Muire Gan Smál and Meelickmore National School, and 5th and 6th class pupils from Gaelscoil Uileog de Búrca, Lochán na mBan were confirmed by Archbishop Michael Neary in the Church of St Colman following participation in the ‘You Will Be My Witness’ programme.

The other primary school in the parish, Barnacarroll NS, alternates with the Gaelscoil, and next year’s 5th and 6th classes from Barnacarroll will be confirmed in 2018.

Preparations on the part of the children of the parish began last November with the first of their ‘You Will Be My Witness’ evenings held in St Colman’s College, Claremorris. The ‘You Will Be My Witness’ programme is designed to offer resources to members of parish teams that will enable them to encourage, challenge and invite parents and the wider community to become more actively involved in preparation for Confirmation.

Children in the parish were helped by parents and members of the parish team to explore the themes of belonging, believing, being, becoming and beginning again during four Monday evening sessions. A fifth session will take place at a later date. 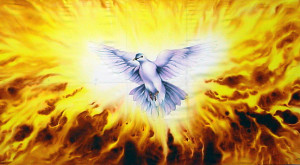 Students from the parish’s two secondary schools – Mount Saint Michael Secondary School and St Colman’s College – were also involved in preparations with the children. Students from both schools visited the primary schools of the parish as part of the ‘Peer 4 Peer’ programme.

Caroline Harrison, a teacher at Mount Saint Michael, described the programme as an extremely positive one that “promotes positive self-development and confidence building regarding decision making at a key time in a young person’s life”.

Aoife Carney, one of the students from Mount Saint Michael who participated in the programme, said that she felt she had made a difference in the lives of the primary school pupils she worked with, and described it as “the most rewarding experience of TY [Transition Year] yet”.

Deputy Principal of St Colman’s College Roy Hession, who along with Mary Egan coordinates the programme in his school, described it as “a fantastic programme [that] addresses various contemporary issues in the lives of pupils preparing for the sacrament of Confirmation including communication, friendship, decision making and alcohol/smoking”.

As well as contributing to preparation for Confirmation, the programme gives the secondary school pupils what Mr Hession describes as “a taste of life as a primary school teacher and all that entails from planning to delivery to assessment of classroom lessons”. He said that “this in itself is a great learning experience for young men starting to think about possible career paths in the years ahead.”

Conor McGuinness, a TY student at St Colman’s, said that the programme gave him confidence, enjoyment and the ability to talk in front of a large group of primary school students. He said that “From the training for the Peer 4 Peer programme to doing the real thing with the primary school children, it was a very educational endeavour, a rewarding programme and most of all a fun experience”, and he said he would recommend the programme to any TY student thinking of becoming involved.

Múinteoir Máire Uí Dhinnéide, Príomhoide (Principal) of Gaelscoil Uileog de Búrca, said that she found the programme very beneficial: “It is delivered in a child-friendly and interactive way. When pupils were surveyed at the end of the programme, they reported that it had been very enjoyable and worthwhile. They also recommended that the school continue to engage with Peer 4 Peer.”

In Claremorris, as in other parishes, this programme is proving to be popular among the children involved, with no shortage of young volunteers each month for the many ‘jobs’ to be done at Mass.

To keep up to date with the latest developments in Tuam Youth Ministry, visit www.facebook.com/TuamDYC.