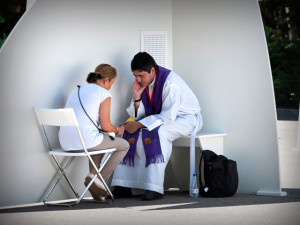 Liffey Valley has become the latest Shopping Centre to facilitate ‘pop-up’ confession. Local parishes took over an empty store at the shopping centre, and parishioners and a rota of up to ten priests offered confession and a welcome pause for busy shoppers in the lead up to Christmas.

Co-Parish Priest Fr Padraig O’ Sullivan told Catholicireland.net that during his hour and a half stint on duty, someone came in for confession every ten minutes.

“It was a team effort. Quite a few of our parish pastoral council members and volunteers from the churches came with leaflets and prayer cards and information about the parishes and what was going on. They were  letting people know that we were there. Most of those who came in went to confession,” he said.

The Clondalkin cluster or hub includes seven parishes and nine churches in Dublin. They had seen confession offered in another shopping centre down the country and first offered confession in their local LiffeyValley shopping centre last Easter. That was very well received but Fr O’Sullivan cautioned that parishioners and priests have to be very respectful of people’s wishes and offer a ‘friendly face’.

“Some of our volunteers were outside alerting people that we were there. It wasn’t ‘in your face’ or anything. There was a good response,” he said

Many of the people who attended confession had not done so in a long time. The Clondalkin group had user-friendly leaflets about the sacrament and examination of conscience. “I gave them that as they were going and invited them to come back another time. Some of them hadn’t a great knowledge about how to make a confession and I had to help them quite a bit, said Fr O’Sullivan. “At least they made a start and who knows what will come out of it.”

Everybody who was involved wants to continue with pop-up confession events. The Liffey Valley Shopping Centre management was accommodating in making the shop available both last Easter when units were more readily available but also in this busy Christmas period.

A similar initiative has been going on in the midlands. A local bishop and priests were recently available for confessions in Athlone’s Skycourt Shopping Centre, in what was the third year of ‘Mercy in the Mall’ (see catholicireland.net 8th December 2017).