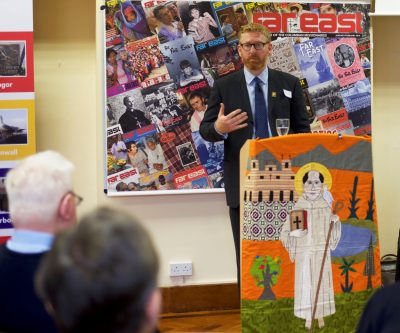 The writings of St Columbanus, a 6th century Irish missionary, reveal a man who was fully engaged with the issues and leading figures of his age, a conference on the legacy of St Columbanus at Dalgan Park was told recently by an expert on the saint.

Dr Alexander O’Hara of the Moore Institute in NUIG said the saint’s letters also revealed a man who was uncompromising in his beliefs, undaunted by authority, and unafraid of speaking his truth.

Dr O’Hara was addressing an international conference on St Columbanus at an annual gathering of members of the European Columban Way.

Dr O’Hara is editor of Columbanus and the Peoples of Post-Roman Europe and Jonas of Bobbio and the Legacy of Columbanus: Sanctity and Community in the Seventh Century.

In his lecture, Dr O’Hara described St Columbanus or Columban as autocratic, domineering, tyrannical even, but also deeply spiritual, caring, and vulnerable.

“He was a very human man who sought to live out his Christian vocation as a monk in a radical way. He walked a tightrope between being an outsider and yet having to operate within power structures – a balancing act which he did not always manage to negotiate successfully.”

The lecture, which was titled ‘Jonah of Bobbio and the contested legacy of St Columban’, looked at the man who wrote the Life of Columban and His Disciples between 639 and 642.

This hagiographical work, which is divided into two books, focuses on the Irish abbot and monastic founder, and on his Frankish successors and communities in the period after St Columban’s death in Bobbio in 615.

In his lecture at Dalgan Park, home of the Missionary Society of St Columban in Ireland, Dr O’Hara said Columbanus’s fierce insistence on the independence of his monasteries from episcopal and lay control and the strict regulation of sacred space provided a model of monastic foundation that his successors and their elite patrons were keen to adapt and exploit.

Jonas was a member of the Bobbio community, which he entered just months after Columban’s death there on 23 November 615.

He knew the men who had been closest to Columban and he wrote a near-contemporary account only 25 years after the death of the saint. 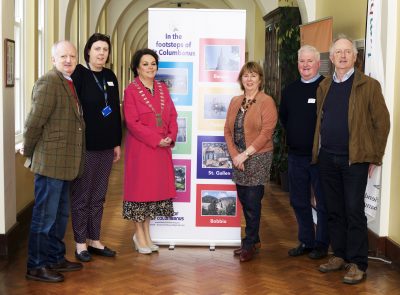 According to Dr O’Hara, Jonas’s task was foremost to demonstrate Columban’s sanctity and to re-vindicate his legacy after a period of crisis within the Columban communities.

“To this aim he had to sidestep and airbrush controversial aspects from Columban’s career – elements that we know were extremely important for Columban from his writings,” he said.

Columban had been a controversial figure during his lifetime and he remained so after his death.

While he was successful at winning patronage and followers at the highest levels of society, his unwillingness to compromise and his autocratic style of leadership led to conflict both with those who had supported him and from within his own communities.

“While the lasting impact of Columban’s religious odyssey may be clear in hindsight, his immediate legacy was not so assured. His letters make clear that he faced considerable opposition from the very beginning of his time in Merovingian Gaul both from external authorities and from members of his own communities.”

There were conflicting visions of community and resistance to Columban’s style of leadership, which many in his communities felt was too harsh.

There was also disagreement over his adherence to the method for calculating the date of Easter favoured by the Irish at the time but which had been replaced by another system in Gaul. Obedience also seems to have been an issue from early on in the Vosges communities.

“The decisive turning point for Columban occurred in 610 when he and the senior insular members of his community were banished from Luxeuil over his refusal to bless the illegimitate children of his benefactor King Theuderic II and for his unwillingness to compromise with Gallic ecclesiastical norms,” Dr O’Hara said.

Columban managed to avoid being sent back to Ireland and he found refuge at the courts of Theuderic’s Merovingian rivals.

The monk Agrestius condemned Columban as a heretic and his practices as heretical.

Jonas was a native of the ancient Roman town of Susa in the foothills of the Alps of north-west Italy. He entered Bobbio within three months of Columbanus’s death in November 615. He served as the personal assistant to both Athala, Columban’s successor and most trusted confidant, and to the third abbot, Bertulf, who commissioned Jonas to write the Life.

Jonas’s intention in writing the Vita Columbani was to rehabilitate the saintly reputation of Columban and his monastic practices.

“This was necessary following the Agrestius affair of 626/27 when the rebel monk had publicly slandered the saint at the Synod of Mâcon. Having the relics of the saint, the Bobbio community may have felt more keenly the necessity to preserve the memory of Columban and to defend his saintly reputation,” he suggested.

Dr O’Hara’s lecture on St Columban and his biographer Jonas of Bobbio was one of a series of talks during a two-day conference on ‘The European legacy of St Columbanus and the advancement of “The Columban Way”’, which drew delegates from Ireland, the UK, France, Italy and Switzerland.

Speaking about plans for the mapping of ‘The Columban Way’ with the aim of making it into a major cultural route in Europe, Alderman Deborah Girvan of Ards & North Down Council, President of the European Association of the Columban Way, told conference delegates that “despite Brexit, this has the potential and is uniting the people of Europe”.

Alderman Girvan added, “So I think it is very important and timely that we are really starting to lift the Columban Way.”

Outlining the priorities of the European Association of the Columban Way, the politician said one priority was that it would become a cultural route of Europe, but she warned that this would take a lot of effort and a lot of research.

Nevertheless, she suggested that in two years’ time, this might be feasible.

Speaking on behalf of the Missionary Society of St Columban, Fr Raymond Husband told conference delegates, “This gathering brings together a group of people who are committed to keeping the legacy of St Columbanus alive through academic research and promoting ‘the Columban Way’ pilgrim route across the island of Ireland and continental Europe.”

He continued, “This legacy of St Columban that crosses geographical boundaries of language, culture, politics and religion extends far beyond Europe. For us Columbans, our patron is an inspiration today as we reach out to peoples across Asia, Latin America and Oceania.”

He said the pilgrim walk, which delegates undertook during the course of the two-day conference, from the Hill of Tara down through Dalgan Woods, would give them a sense of the Columban Way/Turas Columbanus in that part of the Irish countryside.

Dr Mauro Steffenini, President of the Associazione Amici do San Colombano per l’Europa, told the conference that “In the life of St Columbanus we find a marvellous synthesis of the very topical themes of pilgrimage, penance and prayer, especially for Europe.”

He said that through the “rediscovery of the figure of our patron, from a historical perspective, we were able to see how his work and his teaching are still relevant for modern Europe.”