Home > News > Conference to look at how sport can build faith

Conference to look at how sport can build faith 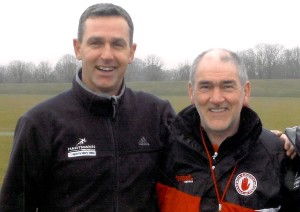 Photo shows Gerard Hartmann and Mickey Harte who will be among the speakers at a major conference on 24 February looking at how the Church can learn from the sense of community engendered by sporting organisations.

Some high profile sports stars are lined up for a conference later this month in Limerick which will look at how the Church can learn from sport’s sense of ‘community’.

The ‘Building Community – Lessons from the World of Sport’ conference is due to take place on 24 February at Mary Immaculate College in Limerick.

It will hear from speakers who will give their personal testimony around how sport helps build a community and how the Church can learn from this.

One of the speakers is one of Ireland’s and the world’s best known physio therapists, Gerard Hartmann, who has described faith and sport as “indelibly linked” stating that both are “at the core of the best communities”

The conference is one of the key diocesan events organised for the lead-in to the 8-10 April Limerick Synod.

Looking ahead to the event, Hartmann said that when he competing, religion was always close to him – “literally”.

“When I competed in triathlon competitions my faith was integral to my success. I always placed a Padre Pio relic under the saddle of my bicycle as I and my family have great devotion to Padre Pio. I used to stitch a brown scapular relic depicting devotion to Blessed Mary on my sports attire,” he said.

“Throughout competitions I recited decades of the rosary praying as I competed. I drew on my faith to empower performance,” he explained.

“My faith is hugely important to me but faith plays a huge role in the sporting world. For 15 minutes before athletes step onto the athletic track at the Olympic Games they go into what is known as the call room to wait before being summoned to the start line.”

“I have worked with 73 Olympic medal winners and numerous world champions and record holders. Spanning the past six Olympic Games and 14 World and European Athletics Championships I have been a regular visitor to the call room.”

“In a place so quiet – yet full of coiled energy – I tend to the final needs of the athletes and observe every movement. Be they European, American, African or Asian, the majority of athletes spend those final moments before the ‘off’ in prayer, in the request for the perfect performance.”

According to Synod Director, Fr Eamonn Fitzgibbon, “Ultimately with our Synod, we are seeking to reimagine the role of the Church in the future and if it is to make the type of contribution we want, it must be at the heart of a community. Sport is at the heart of communities and we have a lot we can learn from sport.”

“Next Wednesday will do that for us. We get to hear from some incredibly inspirational sports people who will give us their insights and from a Synod perspective, we will be hoping to learn from them and see how we can apply those learnings to how we work in communities in the years ahead.”

The ‘Building Community – Lessons from the World of Sport’ conference will be held at the Lime Tree Theatre, Mary Immaculate College on 24 February from 6-9:30pm.