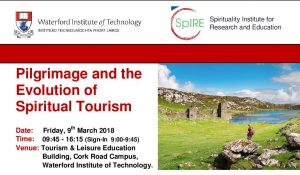 The growing popularity of pilgrim trails and the number of people going on pilgrimages worldwide is resulting in a boom in the study of pilgrimage and its connections with spirituality in academia, a leading Irish Jesuit has said.

Dr Michael O’Sullivan SJ, and Professor Bernadette Flanagan PBVM, are two of the organisers of a forthcoming international conference on ‘Pilgrimage and the Evolution of Spiritual Tourism’ which will be held in Waterford next month.

They are also the Director and Chair, respectively of SpIRE and on the leadership team for the WIT MA in Applied Spirituality.

The conference is the product of a new collaboration between the Spirituality Institute for Research and Education (SpIRE) in Dublin, and the Department of Languages, Tourism, and Hospitality at the School of Humanities at Waterford Institute of Technology (WIT).

It is the first conference of its kind in Ireland and according to Dr O’Sullivan it echoes the renewal of interest in pilgrimage and its connections with spiritual seeking in people. Speaking to Catholicireland.net, Fr O’Sullivan said the conference provides a platform to discuss the potential for the growth of sustainable spiritual tourism in Ireland.

He believes the conference will be of interest to those interested in Celtic spirituality, holy wells, sacred sites, spiritual seekers, and those who wish to study or research spirituality. Some universities in Europe and the USA have established departments focused specifically on spiritual tourism, a popular pursuit for those of all religions and none.

Speakers will include Dr Dee Dyas of York University’s Centre for Pilgrimage Studies, who has researched the significance of pilgrimage from the earliest centuries to the present. She is series editor of the Routledge Studies in Pilgrimage, Religious Travel and Tourism.

Dr Stefano Dominioni, who is Director of the European Institute of Cultural Routes, oversees the certification by the Council of Europe of cultural routes in the field of European heritage.

Ireland’s pilgrim routes will be the focus of a talk by John G O’Dwyer, Chairperson of Pilgrims Path Ireland, and author of ‘Pilgrim Paths in Ireland: From Slieve Mish to Skellig Michael’. The Pilgrim Paths of Ireland are a selection of ancient religious routes around the country which have documented claims to having been used by pilgrims since ancient times.

“John O’Dwyer will highlight how the demand for pilgrim trail walking in Ireland resulted in the Pilgrim Paths Project, set up by the Heritage Council in 1997 with the objective of the development of a network of walking routes along medieval pilgrimage paths,” Dr O’Sullivan explained.

Two of the speakers were among the first cohort of graduates of the WIT MA in Applied Spirituality programme that runs in Dublin with the support of the Spirituality Institute for Research and Education (SpIRE – www.spiritualityinstitute.ie)

Other speakers include Annette Esser from Germany and Laura Beres who works in Canada.

The participants who will not be giving papers include Professor Brumar Constanta from Romania. She is a Professor of economics and contributes to the development of Professional Training Standards adapted to European standards for Economics/Tourism and Food.

According to Dr O’Sullivan, the conference situates the popular revival of Irish pilgrim paths in an international context, providing an opportunity to discuss the potential for Ireland as a sustainable spiritual tourism destination.

“Spiritual tourism is a rapidly expanding segment in the overall tourism market and deserves special attention in an area like the South East of Ireland which has great resources for such an activity,” Fr O’Sullivan told Catholicireland.net.

“We are delighted to be involved with this initiative with WIT because it shows how a third level Institute of Technology and an education and research Institute of Spirituality can come together to serve the spiritual quest of people and to further employment, tourism, curriculum development, and development generally regarding spiritual sites in the South East and Ireland in general.”

The Jesuit is at the forefront of the development of the academic study of spirituality in Ireland and internationally and said he valued this conference as an opportunity to develop SpIRE’s partnership with WIT in the field of spirituality studies.

“This conference will be of interest to people interested in Celtic spirituality, holy wells, and sacred sites, to spiritual seekers, and those who wish to study or research spirituality.”

“WIT already addresses a growing interest in spirituality and a search for meaning in the general population by offering MA and PhD opportunities in the study of contemporary spirituality – with support and assistance from SpIRE in Dublin. Special interest modules in tour guiding for spiritual tourists, and research projects, are being considered,” he said.

The Waterford venue ties in with the city’s history, heritage and culture with a unique Viking quarter. The conference will take place in the Tourism and Leisure Education Building, Cork Road Campus, WIT, Waterford on Friday 9th March.