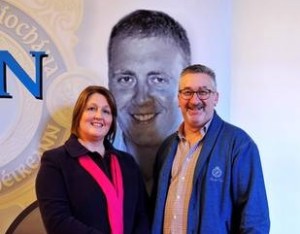 Caroline Donohoe (wife of Garda Adrian Donohoe) and Fr Michael Cusack CSsR at the launch of the concert ‘Remembering Adrian’.

A special concert to mark the third anniversary of the murder of Detective Garda Adrian Donohoe later this month has been completely sold out weeks before it is due to take place.

The concert is to take place on 29 January, four days after the date of his death but three years exactly to the day.

Garda Donohoe was shot dead outside Lordship Credit Union in Co Louth on the night of 25 January 2013.

A spokesperson for ‘Remembering Adrian’ this week confirmed that all 550 tickets have now sold.

The concert is being held in St Joseph’s Redemptorist Church in Dundalk where Garda Donoghue’s funeral took place and all the funds raised will go towards a sports scholarship aimed for young people.

It has also emerged that such is the interested in it, that the organisers are looking at recording the event.

A new Facebook page, ‘Remembering Adrian’, has also been created with over 500 likes in three days.

Speaking recently spokesperson for the group Kathleen Maddy said that putting together the concert is a sizeable project but has been made so much easier by a ready willingness from everybody approached.

“It is going to be a major event, which is only right considering it is Adrian we are remembering. His death shocked everyone in this area to the core and now when we approach people in the community with an event that will honour him, we are pushing open doors.”

She added that they were delighted that Fr Michael Cusack CSsR and the Redemptorist Community were allowing them hold the event in the church.

“I know from our discussions with Caroline that this was the first and only option and we are very grateful for the help, support and involvement given.”

Kathleen Maddy thanked the members of the “Gardaí led by Inspectors Mohan and Beggy in for their input, support and advice in joining with us to organise this while they must yet again mourn the tragic passing of a colleague Garda Tony Golden”.

“Most of all I must acknowledge the involvement of Caroline in supporting this event and in helping us to identify where Adrian himself would have liked monies raised in his memory to go to.”

Speaking about of the concert Garda Donohue’s wife Caroline said, “This concert is a fantastic tribute to Adrian and a beautiful way for us to celebrate who Adrian still is and will always be to us. Words cannot express how very grateful I am to everyone involved from the artists to the organisers and I wish them all every success.”

Organisers have said they are considering making the event an annual or regular fundraiser in Adrian Donohoe’s memory.

MC for the night will be RTÉ newscaster Eileen Dunne.