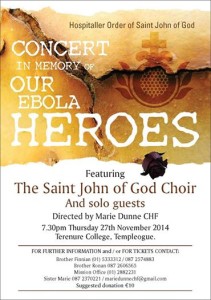 An evening of music in memory of Ebola heroes is to be held in Dublin later this month and will feature the St John of God Choir with solo guests directed by *Marie Dunne CHF.

However, the crisis did force the hospital to close to the public for the first time ever following the tragic deaths of infected staff, among them Spanish missionary, Fr Miguel Pajares.

The State recommended quarantining and disinfecting the hospital and training staff in infection prevention and control measures. It is hoped it will reopen this month.

In the meantime, the hospital has facilitated an outreach programme to offer food and other basics to quarantined families, giving them health education and monitoring their physical health and administering basic medical malaria treatment when necessary.

A holding centre is also being operated, which the President of the Republic of Sierra Leone, Dr Ernest Bai Koroma, visited and expressed satisfaction with and pledged his support for.

The hospital has organised to meet all the traditional leaders in the 146 villages in Marampa chiefdom to motivate them to join the fight to eradicate Ebola within the community.

UNICEF has reported that, despite early signs of progress in some parts of Liberia, Ebola continues to ravage families and communities in much of Guinea, Liberia and Sierra Leone. These countries’ very survival depends on Ebola’s end.

“We cannot treat our way out of this outbreak. We must stop the flow of new cases, and not just in capital cities and towns but in remote rural areas,” Dr Peter Salama, Global Ebola Emergency Coordinator with UNICEF said.

“Fear and stigma must be overcome as communities change their behaviors around care for their sick loved ones and the burial of those who have died,” Dr Salama, who was recently in the three affected countries, said.

“There is a glimmer of hope in the case of Liberia when numbers of infection seems to have stabilised,” he said adding that there can be no rest until the “last embers of the disease are extinguished.”

At UNICEF and its partners’ first conference of Ebola survivors in Sierra Leone, around 40 participants reported discrimination. None were currently employed, even those who had previously worked as nurses.

Children account for around one fifth of all confirmed cases of Ebola to date, but even more important than the direct impact on children is the indirect one. More than 4,000 children have been made orphans by the outbreak.

“Death is all around them. They see medical personnel in masks and protective equipment taking away dead bodies and spraying mysterious liquids. Schools are closed, and primary health care services are unreliable or unavailable. They are discouraged from playing with other children and confined to their homes,” Dr Salama said.

Others who are living in the affected countries say that it is like being in prison and hostages in their own homes.

Antoinette, one of the young members of the Focolare Movement in Sierra Leone, stated “This virus seems to make us more selfish and distrustful towards each other; it does not allow us to go freely to meet our friends.”

She reached out by preparing meals for neighbouring families who were left with nothing to eat when they were unable to go out.

Fr Carlo Di Sopra of the diocese of Makeni in Sierra Leone stated that people see their loved ones die or taken to specialised centres for Ebola which are far from home.

“Many, once they leave, do not come back. The families do not know anything more about them or they about their families. So we can understand why some are hidden and others prefer to die in their own villages,” he said.

The virus is not the only thing to be defeated, but also ignorance according to Carlo Montaguti, a doctor in Ivory Coast who conducted a study on the Ebola epidemic published in Nouvelle Cité Afrique.

He explained that people are asking themselves: is there really Ebola or is it just propaganda? Who has caused this illness? Maybe they just want to sell us the vaccine to make a profit?

There is also a failure of the national health systems to respond to such an emergency and a lack of funds.

*Marie Dunne CHF is a involved in music and faith ministry and a liturgical composer.