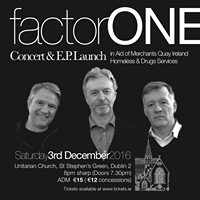 Following on from an appearance on ‘The Hit’ on RTE television in recent years, Factor One is making something of a comeback with a concert and E.P. launch.

Positive songs with roots in the gospel message are among the band’s repertoire which will feature at the concert in the Unitarian Church in Dublin.

The new E.P. songs come from personal experience. ‘If it’s not too much to ask’ is described by band member Andrew Basquille as a “prayer or a wish list” for the kind person or better self someone would like to be.

‘I see what I’m missing’ is a song about trying to put oneself in the position of someone who is suffering loss in life.

Another, ‘Timeless Gifts of Love’, comes from a meditation of Chiara Lubich who founded the *Focolare movement, and is about living fully in each present moment. 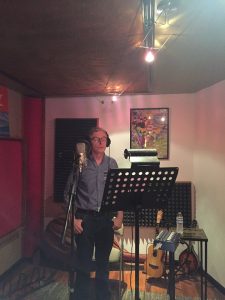 Andrew Basquille, Factor One, recording at The 515 Studio, Nashville

“From the very beginning Factor One wanted our songs to be inspired by our experience of putting the gospel into practice in our everyday lives, and basically the songs are an expression of that. They are not explicitly hymns or gospel songs or sacred songs but they are songs that everybody can relate to,” said Andrew Basquille.

A significant moment for Factor One as a young band was representing Ireland at the Genfest youth rally in front of an audience of 20,000 at the Palaeur football stadium in Rome. During that same year, the World Youth Day was initiated by Pope John Paul II and Genfest was later to become an official event of World Youth Day.

In the years following, the young Factor One band members were married one by one and became fully occupied with family life and day jobs. 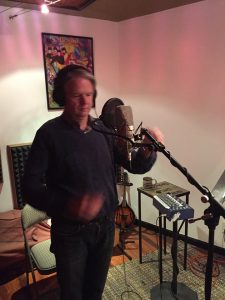 Padraic Gilligan, Factor One, recording at The 515 Studio, Nashville

Last year, the trio were back with a sell-out 30th anniversary re-union concert. Due to popular demand, and to raise funds for Merchants Quay Ireland Homeless and Drugs Services, they are having another concert this December.

“People really enjoyed the last one. They said you must really do this again so it’s not just a one off,” explained Andrew Basquille.

Earlier this year, members of Factor One recorded new songs at The 515 Studio in Nashville, where they rubbed shoulders with some of the ‘royalty’ of the famous American home of country and western music such as Martina McBride.

Now they are back and very much looking forward to sharing the fruits of their work at Nashville. 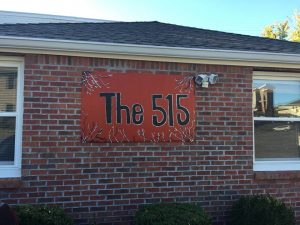 The 515 Studio in Nashville

The concert is on Saturday, 3 December in the Unitarian Church, St Stephen’s Green, Dublin 2 at 8pm.

Tickets are available on: http://www.tickets.ie.

*The Focolare movement works towards the fulfillment of Jesus’ prayer ‘Father may they all be one’ and has spread from the Catholic church to other Christian denominations and faiths.