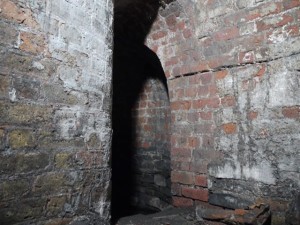 An underground holy well associated with St Patrick in the heart of Dublin will not be destroyed by the proposed Luas Cross City construction project, the Railway Procurement Agency has assured.

St Patrick’s Well, according to some historians, is where the country’s patron saint baptised new converts to Christianity in the 5th century.

Today, it lies hidden from view beneath Nassau Street. The Irish language version of the street’s name testifies to the well’s existence – Sráid Thobar Phádraig.

However, historian Gary Branigan has recently claimed that the €368m Luas Cross City construction project, which will link the Red and Green Luas lines, will affect the well and may even result in its destruction.

The new connecting line is due to run past Trinity College and the historian is worried that Luas works will result in the protected structure being lost.

Speaking to the Irish Times, Mr Branigan said, “Few pedestrians walking along modern-day Nassau Street will be aware that beneath their feet lies a hidden and ancient site of pilgrimage associated with none other than St Patrick himself.”

“Nassau Street itself was called Patrick’s Well Lane until it was renamed in the 18th century after the accession to the throne of William III, ruler of the house of Orange-Nassau.”

The author of ‘Ancient & Holy Wells of Dublin’ has called on the Minister for Transport, Leo Varadkar, to review the route in order to preserve the well.

Responding the concerns raised by Mr Branigan, the Railway Procurement Agency said it was aware of the well and that it would not be affected by the Luas works.

The plight of the well prompted Swift to pen ‘Verses on the Sudden Drying up of St Patrick’s Well, Near Trinity College, Dublin, 1726’ in which he lampooned the drinking habits of Trinity College’s students. Known for their drunkenness, Swift insinuated that they had even drunk the well dry.

A survey was carried out on the well in 2009 revealed some structural concerns.