Compendium of the Catechism (2005)

This Compendium is a synthesis of The Catechism of the Catholic Church and contains, in concise form, all the essential and fundamental elements of the Church's faith. 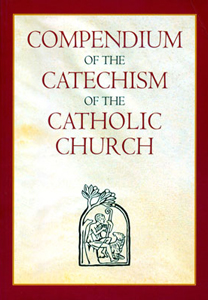 PART ONE: THE PROFESSION OF FAITH

SECTION ONE: ‘I believe’ – ‘We Believe’
Chapter One: Man’s Capacity for God
Chapter Two: God Comes to Meet Man
The Revelation of God
The Transmission of Divine Revelation
Sacred Scripture
Chapter Three: Man’s Response to God
I Believe
We Believe

PART TWO: THE CELEBRATION OF THE CHRISTIAN MYSTERY

Section One: Man’s Vocation in the Spirit
Chapter One: The Dignity of the Human Person
Man the Image of God
Our Vocation to Beatitude
Man’s Freedom
The Morality of the Passions
The Moral Conscience
The Virtues
Sin
Chapter Two: The Human Community
The Person and Society
Participation in Social Life
Social Justice
Chapter Three: God’s Salvation: Law and Grace
The Moral Law
Grace and Justification
The Church Mother and Teacher

Section Two The Lord’s Prayer: Our Father
‘The Summary of the Whole Gospel’
‘Our Father Who Art in Heaven’
The Seven Petitions

APPENDIX
A. Common Prayers
B. Formulas of Catholic Doctrine

CHAPTER ONE: MAN’S CAPACITY FOR GOD

‘You are great, O Lord, and greatly to be praised […] You have made us for yourself and our heart is restless until it rests in you.’ (Saint Augustine)

2. Why does man have a desire for God?
God himself, in creating man in his own image, has written upon his heart the desire to see him. Even if this desire is often ignored, God never ceases to draw man to himself because only in God will he find and live the fullness of truth and happiness for which he never stops searching. By nature and by vocation, therefore, man is a religious being, capable of entering into communion with God. This intimate and vital bond with God confers on man his fundamental dignity.

3. How is it possible to know God with only the light of human reason?
Starting from creation, that is from the world and from the human person, through reason alone one can know God with certainty as the origin and end of the universe, as the highest good and as infinite truth and beauty.

4. Is the light of reason alone sufficient to know the mystery of God?
In coming to a knowledge of God by the light of reason alone man experiences many difficulties. Indeed, on his own he is unable to enter into the intimacy of the divine mystery. This is why he stands in need of being enlightened by God’s revelation, not only about those things that exceed his understanding, but also about those religious and moral truths which of themselves are not beyond the grasp of human reason, so that even in the present condition of the human race, they can be known by all with ease, with firm certainty and with no admixture of error.

5. How can we speak about God?
By taking as our starting point the perfections of man and of the other creatures which are a reflection, albeit a limited one, of the infinite perfection of God, we are able to speak about God with all people. We must, however, continually purify our language insofar as it is image-bound and imperfect, realising that we can never fully express the infinite mystery of God.

THE REVELATION OF GOD

6. What does God reveal to man?
God in his goodness and wisdom reveals himself. With deeds and words, he reveals himself and his plan of loving goodness which he decreed from all eternity in Christ. According to this plan, all people by the grace of the Holy Spirit are to share in the divine life as adopted’ sons’ in the only begotten Son of God.

7. What are the first stages of God’s Revelation?
From the very beginning, God manifested himself to our first parents, Adam and Eve, and invited them to intimate communion with himself. After their fall, he did not cease his revelation to them but promised salvation for all their descendants. After the flood, he made a covenant with Noah, a covenant between himself and all living beings.

8. What are the next stages of God’s Revelation?
God chose Abram, calling him out of his country, making him ‘the father of a multitude of nations’ (Genesis 17:5), and promising to bless in him ‘all the nations of the earth’ (Genesis 12:3). The people descended from Abraham would be the trustee of the divine promise made to the patriarchs. God formed Israel as his chosen people, freeing them from slavery in Egypt, establishing with them the covenant of Mount Sinai, and, through Moses, giving them his law. The prophets proclaimed a radical redemption of the people and a salvation which would include all nations in a new and everlasting covenant. From the people of Israel and from the house of King David, would be born the Messiah, Jesus.

In giving us his Son, his only and definitive Word, God spoke everything to us at once in this sole Word, and he has no more to say. (Saint John of the Cross)

10. What is the value of private revelations?
While not belonging to the deposit of faith, private revelations may help a person to live the faith as long as they lead us to Christ. The Magisterium of the Church, which has the duty of evaluating such private revelations, cannot accept those which claim to surpass or correct that definitive Revelation which is Christ.

THE TRANSMISSION OF DIVINE REVELATION

11. Why and in what way is divine revelation transmitted?
God ‘desires all men to be saved and to come to the knowledge of the truth’ (1 Timothy 2:4), that is, of Jesus Christ. For this reason, Christ must be proclaimed to all according to his own command, ‘Go forth and teach all nations’ (Matthew 28:19). And this is brought about by Apostolic Tradition.

12. What is Apostolic Tradition?
Apostolic Tradition is the transmission of the message of Christ, brought about from the very beginnings of Christianity by means of preaching, bearing witness, institutions, worship and inspired writings. The apostles transmitted all they received from Christ and learned from the Holy Spirit to their successors, the bishops, and through them to all generations until the end of the world.

14. What is the relationship between Tradition and Sacred Scripture?
Tradition and Sacred Scripture are bound closely together and communicate one with the other. Each of them makes present and fruitful in the Church the mystery of Christ. They flow out of the same divine well-spring and together make up one sacred deposit of faith from which the Church derives her certainty about revelation.

16. To whom is given the task of authentically interpreting the deposit of faith?
The task of giving an authentic interpretation of the deposit of faith has been entrusted to the living teaching office of the Church alone, that is, to the successor of Peter, the Bishop of Rome, and to the bishops in communion with him. To this Magisterium, which in the service of the Word of God enjoys the certain charism of truth, belongs also the task of defining dogmas which are formulations of the truths contained in divine Revelation. This authority of the Magisterium also extends to those truths necessarily connected with Revelation.
17. What is the relationship between Scripture, Tradition and the Magisterium?
Scripture, Tradition and the Magisterium are so closely united with each other that one of them cannot stand without the others. Working together, each in its own way, under the action of the one Holy Spirit, they all contribute effectively to the salvation of souls.

18. Why does Sacred Scripture teach the truth?
Because God himself is the author of Sacred Scripture. For this reason it is said to be inspired and to teach without error those truths which are necessary for our salvation. The Holy Spirit inspired the human authors who wrote what he wanted to teach us. The Christian faith, however, is not a ‘religion of the Book’, but of the Word of God – ‘not a written and mute word, but incarnate and living’ (Saint Bernard of Clairvaux).

22. What importance does the New Testament have for Christians?
The New Testament, whose central object is Jesus Christ, conveys to us the ultimate truth of divine Revelation. Within the New Testament the four Gospels of Matthew, Mark, Luke and John are the heart of all the Scriptures because they are the principle witnesses to the life and teaching of Jesus. As such, they hold a unique place in the Church.

25. How does man respond to God who reveals himself?
Sustained by divine grace, we respond to God with the obedience of faith, which means the full surrender of ourselves to God and the acceptance of his truth insofar as it is guaranteed by the One who is Truth itself.

26. Who are the principal witnesses of the obedience of faith in the Sacred Scriptures?
There are many such witnesses, two in particular: One is Abraham who when put to the test ‘believed in God’ (Romans 4:3) and always obeyed his call. For this reason he is called ‘the Father of all who believe’ (Romans 4:11-18). The other is the Virgin Mary who, throughout her entire life, embodied in a perfect way the obedience of faith: Let it be done to me according to your word (Luke 1:38).

27. What does it mean in practice for a person to believe in God?
It means to adhere to God himself, entrusting oneself to him and giving assent to all the truths which God has revealed because God is Truth. It means to believe in one God in three Persons, Father, Son and Holy Spirit.

28. What are the characteristics of faith?
Faith is the supernatural virtue which is necessary for salvation. It is a free gift of God and is accessible to all who humbly seek it. The act of faith is a human act, that is, an act of the intellect of a person – prompted by the will moved by God – who freely assents to divine truth. Faith is also certain because it is founded on the Word of God; it works ‘through charity’ (Galatians 5:6); and it continually grows through listening to the Word of God and through prayer. It is, even now, a foretaste of the joys of heaven.

I believe, in order to understand; and I understand, the better to believe. (Saint Augustine)

30. Why is faith a personal act, and at the same time ecc1esial?
Faith is a personal act insofar as it is the free response of the human person to God who reveals himself. But at the same time it is an ecclesial act which expresses itself in the proclamation, ‘We believe’. It is in fact the Church that believes: and thus by the grace of the Holy Spirit precedes, engenders and nourishes the faith of each Christian. For this reason the Church is Mother and Teacher.

No one can have God as Father who does not have the Church as Mother. (Saint Cyprian)

32. In what way is the faith of the Church one faith alone?
The Church, although made up of persons who have diverse languages, cultures and rites, nonetheless professes with a united voice the one faith that was received from the one Lord and that was passed on by the one Apostolic Tradition. She confesses one God alone, Father, Son, and Holy Spirit, and points to one way of salvation. Therefore we believe with one heart and one soul all that is contained in the Word of God, handed down or written, and which is proposed by the Church as divinely revealed.