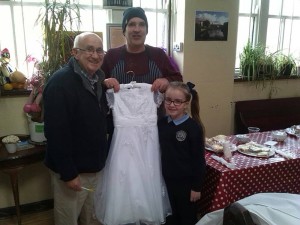 The power and generosity of people in Ireland is still there. People love helping each other according to Catriona Twomey, volunteer co-ordinator with Cork Penny Dinners.

The charity, founded during Famine times as a soup kitchen, today serves over 1,000 meals a week.

But it has now unexpectedly gone into the business of providing free communion outfits for those who are in financial difficulty.

The venture began just over a month ago when Catriona Twomey was approached by a distressed mother.

Her daughter was making her communion and with the father unemployed, the family was struggling to make ends meet.

Catriona was determined to help. When she got home she heard a message on her phone offering two communion dresses. “I thought, ‘God, I didn’t even have time to think about this, and the answer is coming through the door’.”

She realised others were in the same difficulty so put out an appeal for First Communion outfits.

Very quickly, a group of businesses came on board to help the Penny Dinner Communion appeal.

Cremins, a dry cleaners, offered to dry clean once worn dresses for free; three communion outfitters, Cinderella’s Closet, Simply Suits and Buckleys promised to act as drop off points for second-hand outfits and to dress one child each; Joseph’s hair salon agreed to style the hair of first communicants at its Glasheen salon for free on the day of communions in May; an event manager from Cork Weddings and Events came on board.

The culmination of this community effort is a ‘Pop Up’ shop at the River Lee Hotel this Sunday (1 March) which will be open from 1pm to 6pm.

Expert fitters from Cinderella’s Closet, Simply Suits and Buckleys have offered to help fit out the children.

Catriona estimates that by now they have collected over 200 communion dresses and suits. 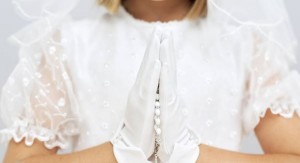 Catriona Twomey says she has been stunned by the public reaction.

“No one expected this was going to happen,” she told CatholicIreland.net.

Asked was she surprised that three children’s outfitters were supporting the venture and perhaps in the process reducing their own profits, she said she was not surprised they were helping.

“I know they are all involved with charities, but it is incredible that they are coming out. Perhaps they more than anyone see the need.”

She did not believe the communion outfit giveaway this Sunday would be taken advantage of by people who could afford to buy dresses. “I doubt that will happen. I’m not worried about it,” she said.

Cork Penny Dinners is one of Cork’s oldest caring organisations which aims to give everyone who calls to its Centre in Hanover Street, a hot nourishing midday meal.

Currently it has around 200 volunteers of all “ages, creeds and nationalities.”

“People love helping each other. We need to tap into that more as a nation,” says Catriona. “Our ethos is that we help whoever comes through the door and no questions are asked.”