Communicating the family can be counter-cultural, says Archbishop Eamon Martin

The Church’s vision of the family as a faithful loving relationship between a man and a woman, open to the gift of children, is “Good News” for society and the world.

This was the assertion of Archbishop Eamon Martin, Archbishop of Armagh and Primate of All Ireland in an address at the ‘Dialogue, Respect & Freedom of Expression in the public arena’ conference in the Pontifical University of the Holy Cross, Rome.

“Communicating the family in this way can appear increasingly counter-cultural in many parts of the world, including Ireland,” he added.

There has been a departure in public discourse from the “philosophical and anthropological underpinning of marriage,” he said, and “the erosion of social supports for traditional marriage” such as in the constitution and legislation.

In addressing the conference on Tuesday (17 April 2018), the Archbishop stated that Irish eyes were smiling when Pope Francis announced that Dublin would host the World Meeting of Families in 2018 (WMOF), but they smiled even more when Pope Francis announced his intention to attend the event. He went on to address how such a “joyful” message could be addressed in an increasingly secular Ireland. 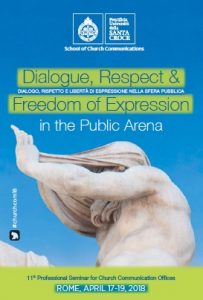 Today is very different from when the then Pope John Paul II visited Ireland in 1979. Secularisation can be seen in the steady decline in church attendance and vocations, he said. In Ireland now, faith is considered just one of many options.

“There are ongoing calls from some quarters for the removal of the Church’s perceived remaining influence in schools, healthcare and public policy making,” he said. Then, in the aftermath of child abuse scandals and what he called “other shameful episodes of the past”, there are people who feel they can no longer trust the message of the Church.

“The sins and crimes of sexual abuse in the Church have not only had tragic consequences in the lives of victims and their families, but have also, as Pope Benedict XVI put it in his Pastoral Letter to the Faithful of Ireland in 2010, ‘obscured the light of the gospel’,” he said.

In this negative environment the Church is challenged and must work alongside those of other faiths and none, to encourage conversations at a national level on the challenges and opportunities in family life. He said he is convinced that a constructive culture of engagement, rather than a pointless culture war, is the best way to ensure that the voice of faith, communicating the Family, can be heard.

“It begins with our conviction that, among the many types of family that are out there, the Catholic Church’s vision of the uniqueness of a faithful and exclusive union between a married man and a woman and their children, is not simply for the privacy of our homes and churches. The Gospel of the Family is meant for mission. It is not to be cloistered away from the cut and thrust of public discourse.” 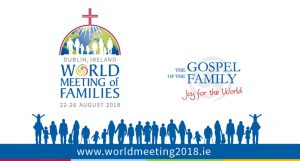 He suggested that the Church’s vision of the family is best communicated by families. “It is in the family that values are transmitted, the wisdom of generations is passed on, the choices between right and wrong are evaluated, connections with the past are made, links with other families are made and upheld. It is in the family that we first are loved and where we first learn how to love,” he said.

He said that movements, associations, basic Christian communities and many other networks that guide and nourish the marriage and family ‘vocation’ need to be part of WMOF.

“For a while I thought that the task of proclaiming the Gospel of the Family in the Church was primarily up to me as a bishop or as a priest, but I have become more and more convinced that the Church’s vision of the family is best communicated by families, and in families, to families. At the 2015 Synod on the Family, I learned that the family is not simply the object of ministry and evangelisation, but it is a powerful agent of evangelisation,” he said.

He concluded that the World Meeting of the Families offers an opportunity to communicate the Gospel of the Family as good for society and good for the Church; it is, as the event theme suggests, a message of Joy for the world.

Tags: Archbishop Eamon Martin, Archbishop of Armagh and Primate of All Ireland, dialogue, Pontifical University of the Holy Cross, Rome, World Meeting of the Families in 2018 (WMOF)