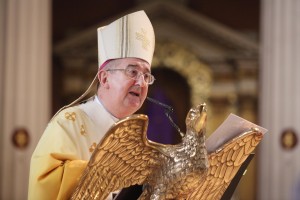 The authors of the 1916 Proclamation were men of faith who dreamed dreams of hope for Ireland and for the Irish people, Archbishop Diarmuid Martin said on Saturday evening in his Easter vigil homily.

But the leader of the Church in Dublin, where major events are underway today to mark the centenary of the 1916 Rising said, “celebrating and commemorating should not consist just in looking back”.

He said the believer in the Risen Christ should be focused towards the future.

They should be in the forefront in combating the “signs of darkness and despair that exist all around us and in working with all people of goodwill who dream” 0f  “building a more compassionate, caring and just society”.

Archbishop Martin said Christians are called to speak the language of resurrection and hope within the society they live in.

“Christians are called to build a society where hope can flourish,” he said and added, “This is a call especially in these days here in Ireland as we celebrate and commemorate the events of 1916.”

A Christian community is called to be a light in the world, he said. “We are called to be with those for whom darkness is excruciating and who see no future, no hope.”

“Wherever we encounter darkness, the Christian must speak words of resurrection, words which say to each of us in the darkness of our hearts, that life and light are possible.”